Two points are two points but... 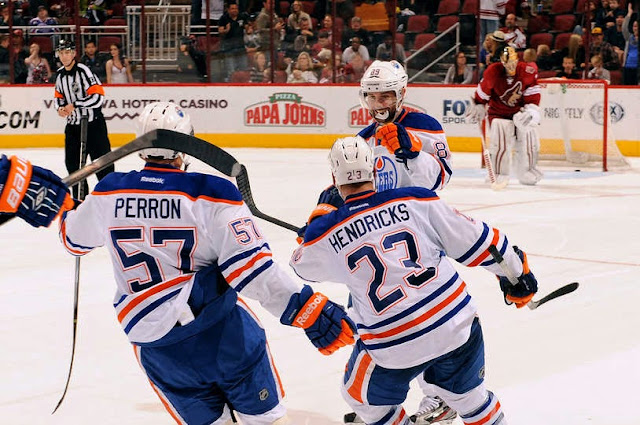 Despite coming out with two solid efforts against the San Jose Sharks and Anaheim Ducks earlier in the week, the Edmonton Oilers looked poised to finish the road portion of the 2013-14 schedule in style on Friday night in Phoenix. Dallas Eakins’ side were a mere forty-one seconds away from pulling off the “perfect” road trip. Three games…three solid showings…but ultimately three regulation time losses.

Unfortunately for them, Coyotes starting netminder Thomas Greiss picked one hell of a time to go for an ill-advised stroll behind his net and subsequently ruin what looked to be shaping up as a perfect storm for the Western Conference cellar dwellers.

In fact, the Oilers 3-2 shootout victory may not only prove to be a costly for them at the draft table but it could quite conceivably cost the Phoenix Coyotes a shot at taking part in 2014 Stanley Cup Playoffs. As of this moment, the Desert Dogs find themselves just one point ahead of the Dallas Stars for the eighth and final playoff spot out West.

Meaning last night’s loss actually handed Dave Tippett’s squad sole possession of that very spot. Problem being, the Coyotes have only four games remaining on their schedule while Tippett’s former employer still have six spaces left on their dance card, including their head-to-head meeting on April 13th to close out the regular season.

From an Oilers perspective, it is almost impossible to be disappointed with the sort of effort and willingness to compete these players have shown over their last three outings. The top line of Jordan Eberle, Taylor Hall and Ryan Nugent-Hopkins continue to be a threat every time they hit the ice and are once again starting to look like the dominant trio they once were.

Apparently all Justin Schultz needed to take the so-called chaos out of his game was Oscar Klefbom, as the pairing continues to grow with each and every shift. Klefbom was absolutely fantastic against Phoenix and was rewarded for his efforts with over twenty-one minutes of ice-time, easily his highest total since being recalled from Oklahoma City.

Perhaps the most pleasant surprise of all has been the play of one Philip Larsen. The diminutive blueliner has been surprisingly effective playing on the Oilers fourth line and to be perfectly honest, the twenty-four year old was probably Edmonton’s third best winger, behind Eberle and Hall, on the trip. Larsen has used his speed to his advantage upfront and much like Mark Arcobello, he has almost gone out of his way to try and engage physically.

Edmonton may have lost the first two games of this road trip but do so in a fairly productive manner. That is of course changed last night. As if the Oilers taking home two points wasn’t bad enough, the Calgary Flames did their provincial rival no favours in edging the Florida Panthers by a score of 2-1. Those two results have managed to bump the Orange and Blue into twenty-eight place in the overall standings…one point clear of the Panthers.

Both teams have four games remaining and both will be on home ice for the duration of the season. Edmonton will face the Ducks, Colorado Avalanche, Los Angeles Kings and Vancouver Canucks, while Florida closeout their campaign against the Stars, Philadelphia Flyers, Toronto Maple Leafs and Columbus Blue Jackets. Neither one will likely secure much in the way of points from those games but here is hoping a healthy Roberto Luongo can do the Edmonton Oilers a solid and find a way to steal a handful of points for his “new” team.

As nice as these two points may feel at the moment, if they end up costing this organization a shot at grabbing Aaron Ekblad on June 27th in Philadelphia, it would really suck. Playing to lose is never a good idea and to be completely fair, it is one of the key reasons why this franchise in the predicament they currently find themselves in. That said, coming out with their usual home ice effort over their final four games may not be such a bad idea.
Posted by Oil Drop at 10:18:00 am