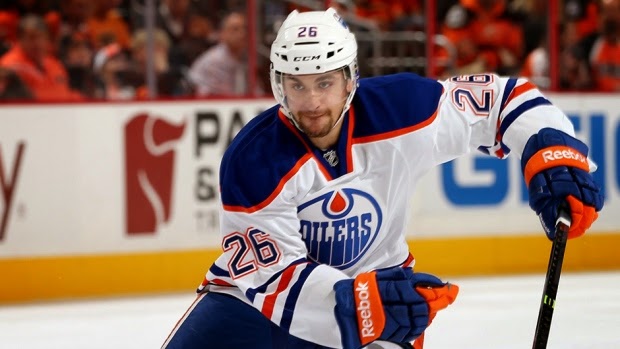 There have been few bright spots in what has been an absolutely disastrous 2013-14 campaign for the Edmonton Oilers.

Outside of Taylor Hall’s point production, Boyd Gordon’s ability to play ridiculously tough minutes, Luke Gazdic’s emergence as one of the league’s top fighters and the fairly impressive debuts of youngsters Oscar Klefbom and Martin Marincin, finding positives is pretty damn tough when it comes to the Western Conference cellar dwellers.

However, one of those few positives would have to be the arrival of one Mark Arcobello as a legitimate NHL player. While he may never turn out to be the top six forward many Oilers fans would love to see him become, there is no arguing the twenty-five year old has shown the necessary game to be a regular on this roster.

The diminutive centre managed to put together a solid rookie campaign, posting eighteen points in forty-one games, before finishing off his year on just an unreal tear with the Oklahoma City Barons in the American Hockey League.

Despite being sent down in what was nothing more than a numbers game, the undrafted free agent signing proceeded to not only score ten goals and twenty-eight points in fifteen games but also played a major role in getting the Barons back into the AHL playoff race.

Apparently the organization had seen enough from the Yale University grad, as the two sides agreed to a one year extension on Monday afternoon. The signing should be one that provides Edmonton with some scoring depth inside their bottom six in 2014-15 but expecting Arcobello to become a regular point producer would be a mistake.

While he did manage to start this season on a run that saw him pick up ten points in his first ten games, he followed that up with just eight over his next thirty-one outings. In his defence, Arcobello was a regular on the Oilers top two lines to start the year but then played up and down the lineup for the rest of the way. That said it is that versatility which is what will likely keep himself in the National Hockey League.

During his forty-one game audition under Dallas Eakins, the Oilers #26 was given the opportunity to show what he could do in a variety of roles and he made the most of those chances. Despite his lack of size, Arcobello showed both a willingness to engage physically and go into the tough areas on the ice…something which very few players on this current roster have shown capable of doing.

He was solid in the faceoff circle during his stint in Edmonton going 51% in over 400 trips to the dot and was used regularly on one of Eakins’ three penalty killing pairings upfront. All of the aforementioned traits make “Arco” a useful depth player but expectations have to remain realistic. There are those who believe he is the ability to replace Sam Gagner as the team’s second line centre and those people are out to lunch.

While Arcobello is a better all-around player than Gagner, he is no way shape or form a top six NHL forward. Now could he be used their in a pinch or as a short-term injury replacement? Of course he could and that is one of the big reasons using one of this team’s bottom six forward spots is such an attractive option. That said, it will be interesting to see where he slots in on a team which both the coach and general manager seem determined to add size and toughness too.

Whether you believe Mark Arcobello is a bonafide everyday NHL player or a guy who will find himself in and out of the Edmonton Oilers lineup, it is safe to say he has proven all he can at the American Hockey League level. He has earned his shot at playing in the show and he could very well become one of those hidden gems this organization has struggled for years to uncover.
Posted by Oil Drop at 8:24:00 pm