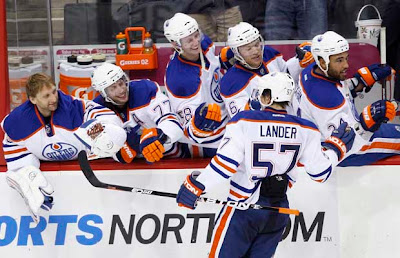 With the young Swede making the club out of camp, you could say that Anton Lander has exceeded expectations that the Edmoonton Oillers had for him heading into the 2011-2012 season. The organization will never admit it publicly but the plan was to have Lander head to Oklahoma City to start the season and have him get used to the "North American" style of game. While that still may happen once Sam Gagner returns from injury, I have a feeling the talented centre will do his best to ensure the Oilers simply can't send him down to the AHL.
No one doubts for a second that he will be a major cog in the Oilers rebuild as a third, if not second line centre behind Ryan Nugent-Hopkins. That being said, for this club to decide to bury Glibert Brule and his $1.8 million contract in Oklahoma City, just shows how much the young centre impressed in training camp. If he was only marginally better, he would be a Baron right now and not getting set to start his NHL career. In fact, the two best centres at Edmonton's camp were Lander and Nugent-Hopkins...and it was by a wide margin.
With the season just days away, what would be fair expectations for # 57? If the kid can go out and play a consistent two way game, help out on the penalty kill and score the odd shootout goal...would that be deemed a success? I would think so and should Shawn Horcoff or Eric Belanger struggle with their game, look for Lander to be given a chance to play with his two countrymen from time to time.

He seems to be one of those players that will do anything that is asked of him, no matter the situation. The teams success is what matters and as long as the 20 year old has a role in that success, all will be good. Make no mistake, Lander is a very confident young man and believes in his abilities as a player but he understands that his approach to the game will lead to him being given opportunities that other players will never get. When he earns the trust of  this coaching staff, which will happen in very short order, Lander will become a go-to-guy in any situation needed and that likely won't change at any point in his career as an Edmonton Oiler. When a player is able to earn that status it tends to stick throughout their career.

Anton Lander will see less ice time then any other centre to start the season but would it shock anyone if he forces his way into a more prominent role this year? Much of that will be determined by the length of time that Gagner is out of the lineup but I have a feeling, his play on the ice could very well force the Oilers hand into making room for him, in the starting lineup, on a permanent basis.
Posted by Oil Drop at 12:18:00 am

Email ThisBlogThis!Share to TwitterShare to FacebookShare to Pinterest
Labels: lander