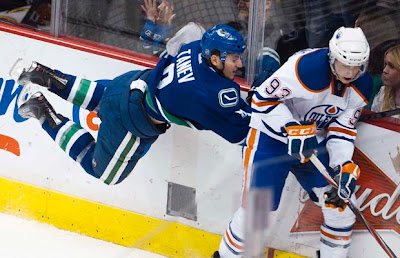 The Edmonton Oilers made it official yesterday afternoon, stating the obvious, that young Ryan Nugent-Hopkins had indeed made the cut and would start the season with the big club. Unless you live under a rock or do not follow the Oilers, the "news of the day" was not news at all. Anyone with two eyes in their head could see the kid belongs in the NHL and to not allow him to play, after clearly earning a spot, would have been the biggest mistake this organization could have made.

Nugent-Hopkins played in four of Edmonton's eight pre-season games and he managed to lead the team in scoring with 6 points. He looked calm whenever he hit the ice and when the puck was on his stick, he was poised as could be. The youngster rarely rushed anything and just let the play come to him and develop. The kid was just as advertised, a player that can think and see the game at another level. Almost everyone, myself included, were curious to see how he would do in his own end of the ice. Not only was he good but he was almost never on the wrong side of the puck in his half of the rink and tracked back into the defensive zone better then any Oilers centre has over the last 5 years that wasn't named Shawn Horcoff. This isn't a nine game audition, the kid is here to stay.

Those that suggest he is to small to play in this league, are people that have not seen the young man play this pre-season. The former Red Deer Rebel has made it clear, against all competition, that he can compete at this level, and at times, may be able to excel at a very young age. The big advantage that the highly talented centre has, is being surrounded by other young skilled players that are driven to succeed and a solid veteran group that can help protect him in tough situations. He will start the season on one of the top two lines, be it playing in the middle with Taylor Hall and Ales Hemsky or in between Ryan Smyth and Jordan Eberle...does that sound like a spot for a player that the organization isn't totally sold on being an NHL ready?

Simply put, Ryan Nugent-Hopkins could not have asked for a better situation to start off his NHL career and the Edmonton Oilers should be applauded for giving the young man the opportunity to seize the moment.
Posted by Oil Drop at 2:54:00 am