What To Do With Ladislav Smid 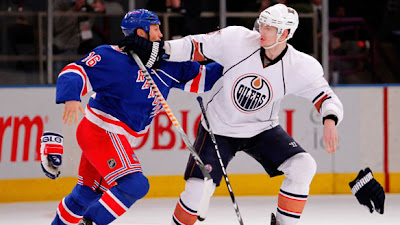 Not many would debate the fact that Ladislav Smid has the ability to become a quality top four NHL defenceman. Unfortunately for the Czech defender, he seems incapable of staying healthy long enough for him to take that next step in his development. Still only 25 years old, he is entering his sixth season but is about to find himself back on the IR list with a shoulder injury..Edmonton signed Smid to a two year extension during the off season but the time has come for the organization to take a serious look at where the defenceman fits into their long term plans.

The list of injuries is starting to mount and since his debut with the Oilers back in 2006-2007, Smid has been knocked out of the lineup on ten separate occasions.
Basically, any type of injury you would think a hockey player could suffer, Smid has suffered in his time with the Oilers. The list of ailments has to be concerning for the organization and was undoubtedly part of the reason for signing him to a short term deal. Smid fits in well with the dynamic of the club and is held in high esteem by teammates while being one of the more popular players in the dressing room. Everything fits for him to be part of the solution long term except for the health issues that continue to hamper the defenceman and keep him from improving his overall game. Whenever he takes a step forward in his play, it seems an injury always knocks him back a notch or two.

It's common knowledge that teams came calling for Ladislav Smid at last years deadline, most notably the Nashville Predators and Chicago Blackhawks, and they were rumored to be offering up quality players like Nick Leddy and Jonathon Blum. Smid on his own would not get the Oilers that type of return but packaged with another player or pick, he could land Edmonton a nice return. As much as the club lacks depth on their blueline, if the opportunity is out there to acquire a top four defenceman and Smid or even Theo Peckham, are the piece that could make it happen...the Oilers may have little choice but to make the move.
Posted by Oil Drop at 9:33:00 am