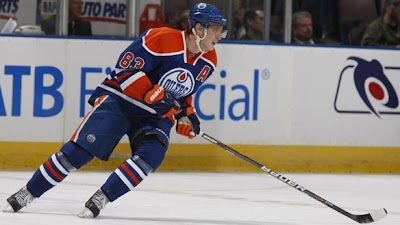 ** Change of plans upfront as it appears Darcy Hordichuk will get into the starting lineup and Petrell will be scratched. I'm guessing Steve MacIntyre will be in for the Pens.**


Not exactly sure on the pairings as of yet but the starting six appear to be:
Gilbert, Barker, Sutton, Peckham, Potter and one of Smid or Petry


** Little disappointing to not see Potter in the starting lineup but not overly surprising. I hope they are not rushing back Smid to quickly but he did receive medical clearance to get back out there. **


The Oilers haven't made it official but look for Nikolai Khabibulin to start in goal for Edmonton. Again, this hasn't been confirmed but everything is pointing towards the veteran getting the start over Devan Dubnyk on opening night.

** Devan Dubnyk was the first one off the ice so he will be getting the nod in the opener.Good for Dubnyk and this was the right choice for the staff to make. Also, do not be surprised if it lights a fire under Khabibulin and becomes a win-win situation for the club. **


Sunday Morning Notes
** The power play units will look like this to start: **
Hall - Nugent-Hopkins - Hemsky
Barker - Petry
Eberle-Smyth-Omark
Paajarvi - Gilbert
I am surprised to Smyth on the second unit but if Hall - Nugent-Hopkins - Hemsky click, the PP will be much better off with him on group two. Lets hope Hemsky doesn't stick to his usual routine on the man advantage.