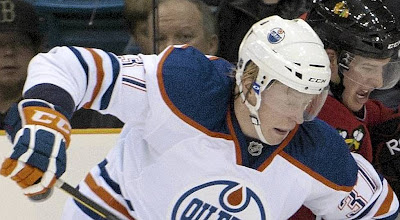 With the season just around the corner, I would say it is time to take a look at the Edmonton Oilers special teams and see if we can determine who will be placed in what role and what is fair as far as expectations go for each player. Lets start off looking at the penalty kill and what potential forward pairings the Oilers may plan on using when shorthanded.
I wrote a piece on the Oilers penalty kill and its struggles before training camp hit, "Penalty Kill", and my guess going into to camp had Shawn Horcoff, Eric Belanger, Ryan Jones and Ryan Smyth as the four main penalty killers with Jordan Eberle seeing time as the season progressed. If the pre-season games were any indication, it seems as though Tom Renney and his staff will not be looking towards Eberle to possibly help out on the PK but instead have Magnus Paajarvi in that role as the season moves along. To use the smooth skating forward in this fashion seems like a smart move in the development of the young Swede. It will allow them to feed Paajarvi a few more minutes as he will likely be seeing third line duty for most of the season and have him become accustomed to the role. As far as the main group of penalty killers go, the four I listed above will all be part of the equation but we can now add two more players into the mix, Lennart Petrell and Anton Lander.
Everyone knew coming into camp, that if Petrell made the squad, he would be used in a penalty killing role. We all heard that he was one of the "best penalty killers in Europe" but I don't think many expected him to be as good as he has shown. He is an absolute hound out on the kill and in my mind, has leap frogged both Jones and Smyth. He should start the season on the Oilers first unit when they are down a man.
The surprise that developed out the pre-season, was the play of Lander. I don't think anyone was surprised at how good the kid was but the fact that his overall game was so well rounded was rather impressive. The young centre saw plenty of time on the PK throughout the exhibition schedule and he did not look out of place. In fact, even at his young age, he has managed to hold his own in the face-off dot, which is very rare for most young players. As long as Lander is up in Edmonton, he will see time on the penalty be it at centre or on the wing.
The Oilers are hoping that Belanger, Lander and Horcoff will give the team the ability to once again win faceoffs in their zone. This has been one of the clubs biggest challenges since the end of the 2007-2008 season. It is simply too much to put on one players shoulders and the fact that Belanger excels in the dot and Lander appears capable of helping out, this should make life for the Oilers captain a lot easier.
As it stands, look for Edmonton to start the season off with a Horcoff - Petrell pairing on the top unit and Belanger - Jones on the second. That would leave Lander and Smyth to be worked into the fold depending on the situation but don't be surprised to see the club roll with three units. If Lander shows he can handle the role once the puck is dropped, it makes perfect sense and will allow guys to be fresh come crunch time.
Posted by Oil Drop at 6:47:00 am