Let The Kid Play With The Big Boys!!! 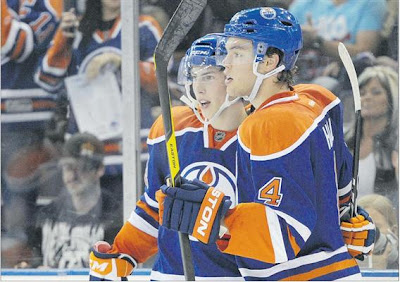 The Edmonton Oilers can not be accused of easing rookie Ryan Nugent-Hopkins into his first NHL season. Pegged to start the season as the teams second line centre, the first overall selection of this summers entry draft, has been propelled to first line duty because of a high ankle sprain to one Sam Gagner. Unless something changes leading up to opening night, it appears he will kickoff his NHL career, playing on a line with Taylor Hall and Ales Hemsky.

Players such as Ryan Nugent-Hopkins are accustomed to being "The Guy". It's hard for most of those players to adjust to the NHL because they become just "one of the guys" and are no longer the straw that stirs the drink. Edmonton have decided to give the native of Burnaby, B.C., that rare opportunity to be "The Guy" right from the get-go. No doubt that he will have to deal with growing pains throughout his rookie season, like any other rookie does, but having him begin his first NHL season with linemates like Hall and Hemsky, allows the youngster to remain in that comfort zone of being a major piece of the puzzle...not just a spare part.

All players are different so just because something worked for player A doesn't mean it will work for player B. Some guys need to be brought in slowly while others can be thrown to the wolves and they'll fend for themselves. As long as someone is there to reel them in, when needed, it is an approach that will work with certain types of people. In fact, I would argue that a major reason that Taylor Hall struggled to start last season, was how the Oilers handled him.

His role was so drastically reduced from what he was used to in Windsor, that I feel it messed with his overall game. Remember, it was a struggle for him early on and he looked very frustrated out on the ice. Be it the banging of the stick on the glass or taking extreme long shifts, you could tell things were getting to him. He saw little to no power play time and was playing sparingly, at times, when it came to 5-on-5 play. As the season progressed, you saw Tom Renney make an effort to double shift him, as much as possible, when he was going. If he scored or did something of note on the ice, he was back out on the ice within the next two shifts. That never happened early in the year and it made things tough on Hall. In fairness to the coaching staff, these types of players don't come around everyday. It's a learning experience for both the player and the team. I give them full credit for figuring it out and changing their philosophy. When you have a player that is a through-bread, you have to use him appropriately or you risk the chance of losing them entirely or hampering their development. Players already need to adjust to the game, on and off the ice, at this level and adding fuel to the fire seems foolish to me.

I give the Oilers full marks for setting Ryan Nugent-Hopkins up to have a successful camp. He played with skilled and or veteran players right from the first puck drop at camp to the last whistle against Vancouver on October 1st. They learned from their hiccups with Hall and made the effort to ensure it did not happen again. There is no guarantee that Nugent-Hopkins has a great rookie season but the Edmonton Oilers have gone out of their way to ensure his transition into the NHL is as painless as possible.
Posted by Oil Drop at 1:40:00 am