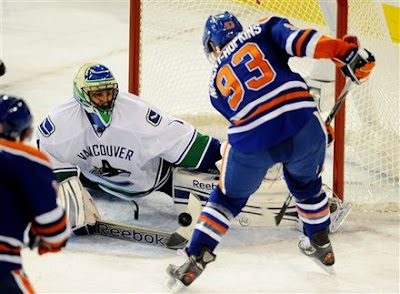 Some would say the Oilers let this one slip away but that would not be giving Vancouver their due. Edmonton was flying high after the first period, up 2-1, on two goals from Nugent-Hopkins. After opening the scoring for the home side on the power play, the rookie centre potted his second of the period with less then 30 seconds to play. Henrik Sedin tied it up on the power play in the second stanza but then last summers first overall selection sent the Edmonton faithful into a frenzy scoring his third goal of the game. To Vancouver's credit, they finished the period off strong and were rewarded with a goal off the stick of Alex Burrows to make it 3-3 after 40 minutes.


The Good
The Bad