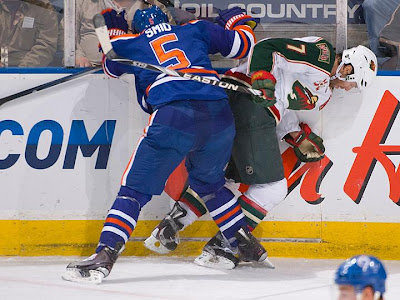 **UPDATE**
Taylor Hall is taking the morning skate but Shawn Horcoff is not. Nothing confirmed yet for either player as far as tonight goes. Sam Gagner has officially been activated but no word on if he will be in the lineup against Minnesota. I would still say no but it is looking like Saturday might just be in the cards.
According to tonight's Game Notes Edmonton have placed a call in for Ryan Keller. I am guessing because it will be a short term call up with the return of Gagner...or maybe they are trying to have a full roster of players named Ryan.
**UPDATE**


With Edmonton still not making a move up front, one would have to assume that Taylor Hall will be ready to go Thursday night. If that is indeed the case, you would have to assume that the lines would remain intact as they were against the Predators on Monday night. If Hall is unable to go, Tom Renney hinted that Sam Gagner is very close to returning, after passing the clubs "drop-off" test. Be it against the Wild or Saturday against the New York Rangers, look for Gagner to make his 2011-2012 debut in the very near future. I honestly expected him to be out another week or so but if he is ready to go, he needs to get in play. Once he returns, the club will have to decide what the plan is for Anton Lander. They either send him to Oklahoma City to play a ton or they move him to the wing and have Lennart Petrell go to the press box. Smart money would be on Lander being sent down but who knows at this point. In all honesty, I was expecting a little more from Petrell when it comes to the physical side of the game. Some games he has been involved, while in others he has looked disengaged.

With Whitney back in and the demotion of Jeff Petry to the Barons, it leaves the Oilers with seven blueliners. At the moment, last years biggest surprise, is the guy on the outside looking in. While Theo Peckham was solid last season, he has been anything but in 2011-2012. To his credit, while not happy about being on the sidelines, he hasn't bitched about his seat in the press box. Word is he has been the teams biggest cheerleader since being benched and it speaks volumes about his character...now if only he could get his game back on track.

That being said, whether it be coming in for Whitney to get a rest or at the expense of someone else, the rugged defender will find his way back in before too long. Of the remaining five starters on the backend, only Tom Gilbert should feel safe. If they do not continue to play well, any of them could find themselves with a seat the press box.

Netminder
Look for the veteran Nkolai Khabibulin to get the nod in goal as the Oilers continue to rotate their netminders on a game by game basis. The Russian has a shot at sending a message he is for real, if he can pull off another quality start. I was hoping that the coaching staff would use the one game in, one game out rotation and to this point, no rational fan could have any complaints with the outcome.