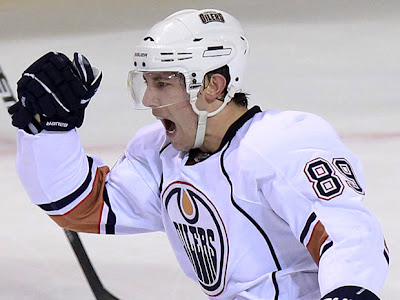 With the imminent return of Sam Gagner to the Edmonton Oilers lineup, the question becomes where does he fit? With the club having scored ten goals through the first five games, they could definitely use the 22 year old. Ryan Nugent-Hopkins has taken a stranglehold of the top line centre spot so Gagner will have to come in and, to an extent, re-establish himself as a threat upfront. That being said, with RNH playing as well as he has, the former sixth overall selection will have less pressure to produce points which allows him to find his game.

There have been some whispers about possibly playing Gagner on the wing when he returns. I am all for looking at moving Sam to the wing down the road but for right now, it would not be the right decision. This was supposed to be the season that Gagner would take a step forward in his development or possibly find himself moved out of the organization. The early season injury has put him behind the eight ball but the focus should remain the same. In order to have a shot at succeeding this season, he needs to be put in a situation he is comfortable with and that can only happen with him playing centre.

The question then becomes, whom does # 89 play with? You would think the Hall - Nugent-Hopkins - Eberle line will be kept intact but  the fear I have, is them also keeping the Smyth - Horcoff - Jones line as a unit. The trio have been good most nights, albeit playing too many minutes, but having Gagner slide in between Linus Omark and Magnus Paajarvi, would not be a wise move. When the three were put together as a line last season, they looked to have little to no chemistry and were often physically dominated. All three of them compete hard on the ice but they are just too damn small. When Ales Hemsky returns, I think it becomes much more cut and dry. You would think the lines would look something  like this:

As for right now, I would say lines of Smyth - Horcoff - Omark and Jones - Gagner - Paajarvi may be the way to go. While the two Swedes are comfortable playing with one another, they have not been able to produce anything offensively so splitting them up may be a much needed kick in the pants. It would allow Gagner the opportunity to get back into a situation that he would be comfortable in while still being able to ease himself into the season. Again, once Hemsky returns things will change dramatically and hopefully Gagner will be finding his stride. Until then, this team will likely continue to struggle to find the back of the net.
Posted by Oil Drop at 10:54:00 am