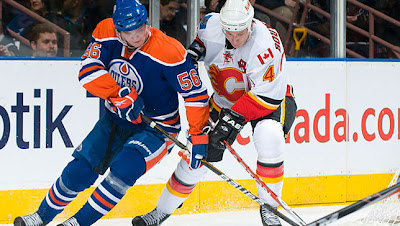 The biggest challenge this team has had through its first three games has been consistency from their forwards. In every game, they have had one line going while the other three have puttered along not getting much done. They have scored all of five goals, four of which have come of the stick of rookie Ryan Nugent-Hopkins. With Ales Hemsky now confirmed to be out of the lineup for at least two weeks, the Oilers are sitting with four injured forwards. Sam Gagner and Ben Eager are still out, though you would think Eager would be close to making his debut, and Darcy Hordichuk has now joined them on the sidelines with a knee injury. Seems like the perfect opportunity to bring in Hartikainen and see if he could help kick start the bottom six and help out on the power play.


The 21 year old Finn, proved last year what he could possibly do at this level and brought it every night. While he has the ability to score, it is his style of  play that this club is in desperate need of. He would likely be on the fourth line with Anton Lander and Eager, once he returns, which would mean Lennart Petrell would come out. Petrell has been decent but he has not shown enough in his two games. He started the season as that 12th or 13th forward and he has done nothing of note that has moved him up in the lineup. Hartikainen not only adds a physical aspect to the clubs bottom six but he gives coach Tom Renney a viable option to move up the depth chart should others continue to struggle. The youngster has shown he can put the puck in the net but more importantly, he will go to the net and get his nose dirty. That is something this team is lacking badly 5-on-5 and it needs to be addressed.

Another area Hartikainen would help is on the power play. Adding the hard working forward into the mix, would allow them to have two units with a net presence on the man advantage. We all know Ryan Smyth will go and cause havoc for opposing teams netminders but no other player goes anywhere near the net, on a regular basis. Hartikainen has shown he has no problem standing in front of the blue paint and taking the abuse that comes with the territory. This team has to start punishing teams for putting them on the power play, ala Detroit, and to this point it has not happened. They have to have options down low to open things up and to this point, Smyth is the only one willing to do the job.

Edmonton has not had organizational depth for sometime and now that they finally do, at least upfront, they seem unwilling to use it. This is a team that have dressed players like Jason Strudwick and Ladislav Smid at forward because of a lack of depth and jam from within their system. They have a player staring them in the face that would add the element they are in desperate need of and all it would take is one simple phone call.
Posted by Oil Drop at 6:46:00 am