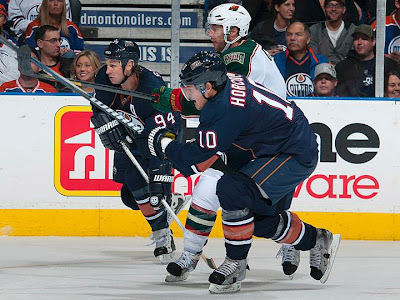 While the Oilers are dealing with injuries to key players in Ales Hemsky and Sam Gagner, they have also had a stand out performance, thus far, from rookie sensation Ryan Nugent-Hopkins to help offset the loss of two of the clubs premier offensive players. Back on October 15th, the coaching staff decided to put together a line of Hall - Nugent-Hopkins - Eberle and they promptly took off with the rookie scoring his first career hat-trick against the Vancouver Canucks. Things were starting to look up and thinking of what this lineup could do with a healthy Hemsky and Gagner was pretty exciting. Fast forward all of five days and this team is starting, once again, to run through Horcoff and Ryan Smyth with a much larger role being given to Ryan Jones. The way the coaching staff has decided to distribute ice time, is becoming an issue. Have a look at what would be the Oilers top seven forwards (not including Hemsky and Gagner):

The numbers that standout most, other then the Horcoff spike, are the increases that both Jones and Smyth have received. When Hemsky went down, you would expect a healthy increase for both Eberle and Hall but that hasn't happened at all. The minutes have gone predominantly to Jones with extra time also going to Smyth. Taylor Hall was the guy, you would think, that would be pushing the 20 minute mark on a nightly basis this season but he has only topped the 19 minute mark once. It is puzzling. Hall is a horse and proved last season that he plays even better when he gets extra time and yet they seem like they would rather have him play less. I respect what Ryan Jones brings to the table and what he does for this hockey club but he is nothing more then a fourth line guy who can fill in on the third unit when need be. Yet, for some reason, he is treated like he walks on water by this coaching staff!! I get that all coaches have their guys and they trust them but enough already. As for Smyth, if you look at his stats last year, you will see, more often then not, he played between 15-18 minutes a night with the Kings...so he comes to the Oilers and plays between 18-23 minutes a night??????????

I understand that Tom Renney and his staff are playing to win but that can still be accomplished while letting your skilled players be just that. Last nights game against Minnesota was the perfect example of how this team can not play moving forward. While the RNH line wasn't having their best night, they were still creating chances when they hit the ice. With the score 1-0 heading into the third, you would think the staff would look to play the hell out of that line in hopes of finding that second goal. Instead, they proceed to play "dump and change" hockey in hopes of wining 1-0 and it came back and bit them in the ass. This after they did they same thing, two nights earlier, against the Calgary Flames. Granted, they were under manned against the Flames but that was not the case against the Wild. They had the horses but they decided to keep them in the stable. Nugent-Hopkins did not see the ice once during the last five minutes of the game or the overtime and then the call on him in the shootout? Nothing like setting the kid up to fail. At nights end, the only forwards who played less then the "top line" were Anton Lander, Ben Eager and Lennart Petrell...this is what the Oilers coaching staff thought would be the best approach to get two points?

Minnesota should have been getting a steady diet of Hall - Nugent-Hopkins - Eberle being shoved down their throat but instead they had to go up against the likes of Belanger, Horcoff, Jones, Petrell and Smyth. Teams that play "not to lose" rather then playing to win, are usually unsuccessful clubs. If  Edmonton wants to build a winner, then go out and take some chances and don't play like chicken shits. Have your players learn to grab a game by the throat and seize the opportunity. That is how guys like Hall and Eberle played in junior and they are used to being successful and not just hoping that things turn out well.

There is a time and place for veterans on young hockey club. Without the right players in place, the development of a young group can go south in a hurry. The Edmonton Oilers have a solid veteran core to help with the development of their players. That being said, those players should be there to"help" the kids along, not to be the stars of the show.
Posted by Oil Drop at 3:57:00 am