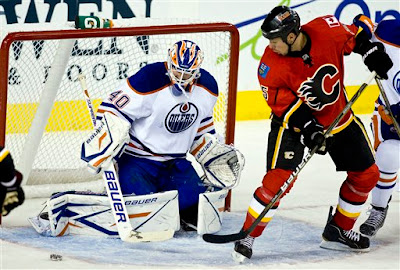 
Edmonton are not likely to make any lineup changes upfront after their 3-1 victory over the Nashville Predators Monday night. Even if they did want to make a move, they don't have any healthy bodies to add in. It was speculated that Lennart Petrell may not dress against the Preds because of an illness but the feisty winger was in the lineup and took his regular shift on the fourth line and penalty kill.

Look for the Hall - Nugent-Hopkins - Eberle line to try and string together a third straight solid effort. The Flames defense could be in for a long night if the trio cycles the puck the way they did against Nashville. Shea Weber and Ryan Suter had their hands full dealing with the youngsters and the Flames do not have any defencemen that are anywhere near as good as the Predators stud blueliners.

The backend are coming off their two best performances as a six man unit this season. That being said, tonight could see the return of defenceman Ryan Whitney to the fold. With Theo Peckham already on the sideline as a healthy scratch, the next logical choice would seem to be Jeff Petry but we shall see. There is the outside chance they give Whitney a few more days rest and bring him back against theWild on Thursday.

Netminder
While Nkolai Khabibulin had little to do Monday night against Nashville, you should expect to see Devan Dubnyk between the pipes for Edmonton. The goalie rotation has been working to perfection so I can not think of any reason why this would change.