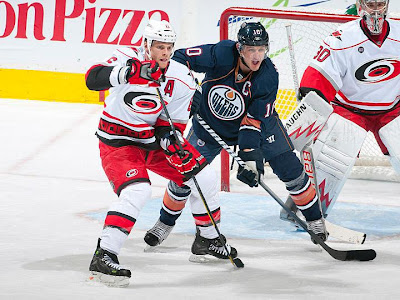 The Edmonton Oilers came into last night's game, on the heels of one of the clubs most disappointing losses of the season. One would think, having the struggling Carolina Hurricanes as their next opponents would have been a good thing...think again. After three days off, the Oilers proceeded to come out and play their worst game of the season. The Eastern Conference cellar dwellers, came into Edmonton's barn and thoroughly dominated. From start to finish, the Canes were the better team and were rewarded with a well earned 5-3 victory, against a beleaguered Oilers team.

Right from the drop of the puck, Carolina came hard and Edmonton looked confused and disinterested. If not for the goaltending of Devan Dubnyk, the Oilers would have been down a couple, early in the first. The Hurricanes thought they had opened the scoring, when winger Chad Larose knocked in a rebound after stripping a bewildered Ryan Smyth of the puck, behind the Edmonton goal. Luckily for the Oilers, the goal was called back when the "War Room" in Toronto deemed that Larose kicked the puck past Dubnyk. The breaks kept coming for the home side, when less then three minutes later, they opened the scoring on a very similar play.

Eric Belanger was credited with his first of the season, when he skated into the Hurricanes crease and knocked the puck loose, with his skate, and past Carolina netminder Cam Ward. The goal was reviewed but it was allowed to stand. They had played just over half the period and Edmonton was up 1-0, despite being completely outplayed. Before the period was out, the visitors would receive a fortunate bounce of their own.

While shorthanded, defenceman Jeff Petry cleared the puck around the boards and it some how ricocheted off the glass, behind the Oiler goal, and dropped over the net on to the stick of Jeff Skinner. The youngster wasted little team firing a shot between Dubnyk's legs and just like that, the score was 1-1.

The second started out much like the opening period but this time, Dubnyk could not come up with the big save...or any, for that matter. As good as the Oilers netminder was in the first, he was equally as poor in the middle frame. In his defence, Edmonton did little to help their goaltender out but you need the occasional save from you goalie and Dubnyk didn't get it done in the second.

Carolina scored three times in a span of eleven minutes, to jump ahead 4-1. Defenceman Jamie McBain fired a bullet over Dubnyk shoulder, on the power play, to give the Canes the lead at the 4:36 mark. Just over seven minutes later, Patrick Dwyer scored his fourth on the season after depositing a pretty feed from Eric Staal past the out stretched Oilers netminder. Larose ended the goal parade, shorthanded no less, when he broke in on a 2-on-1 and fired a shot past Dubnyk. That goal was the low point of the night, as veterans Smyth and Ales Hemsky decided to gingerly make their way to the Oiler bench on a line change and hence creating the odd man rush for Carolina.

Edmonton would get one back, just nine seconds later, when Ben Eager broke in on Ward and poked in his own rebound, for his first goal as an Oiler. That made it 4-2 heading into the third, with the momentum seemingly back on the side of the home team.

Tuomo Ruutu restored Carolina's three goal lead, at the 3:43 mark of the third, when he snapped a quick shot past a stunned Dubnyk. What seemed like a harmless situation, turned into goal number five, when both Smyth and Shawn Horcoff decided to cover open space, instead of Ruutu...who was situated between the two confused Edmonton forwards.

At the 7:19 mark, Skinner was awarded a penalty shot after defenceman Theo Peckham chopped the sophomore down, from behind, on a break away. Dubnyk managed to stop the talented Hurricane winger and the Edmonton had life once again.

After failing to convert on their power play and successfully killing off a full two minute 5-on-3 Hurricanes man advantage, the Oilers cut the lead to 5-3. Rookie Ryan Nugent-Hopkins, slipped his thirteenth of the season past Ward, after taking a nice feed from Sam Gagner. With just over six and half minutes to play, Edmonton still had a chance to salvage something from this game but they could not kept the job done.

The Oilers will complete their lengthy six game home stand on Friday night, against the Colorado Avalanche. The club currently sits with a less then stellar 1-3-1 mark, through the first five games.