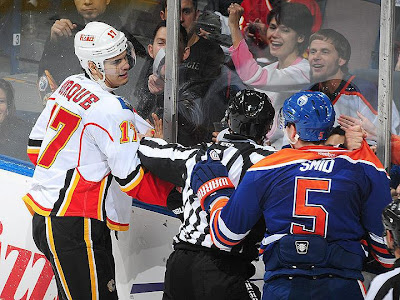 The Edmonton Oilers came out with guns blazing against their Provincial rivals Saturday night and were up two goals, three minutes in. That didn't seem to phase the visiting Calgary Flames, as the team down south, picked themselves off the mat and took it to the Oilers the rest of the way. In what was a highly entertaining night of hockey, Calgary pulled off the come from behind victory, this time by a score of 5-3. The Flames have won seven straight and ten of their last eleven meetings against the Oilers.

Edmonton opened the scoring at the 2:19 mark, when feisty forward Lennart Petrell scored his second on the campaign. Petrell had a Darcy Hordichuk slapshot bounce off him and past Flames starting netminder Mikka Kiprusoff. Forty one seconds later, the Oilers were up by two. Sam Gagner scored his first of the season, on a quick snap shot from the slot. Gagner has been one of the best Oilers of late but hasn't been able to buy a break. Edmonton was barely done celebrating their two goal lead, when Calgary scored on the power play courtesy of Olli Jokinen. Three minutes later, the Flames tied things up, when Rene Bourque banged in his eighth of the season past a stunned Nikolai Khabibulin. Just like that, the game was knotted at two and the Flames had all the momentum. From that point on, it was riverboat hockey at its finest. It's not the game either coach wanted to see but from a fans stand point, it was damn entertaining to watch.

Calgary continued to carry the play in the middle stanza and if not for Khabibulin, this one would have been over after forty. The Oiler netminder made a number of fine stops in the second but none better then a cross crease pad save, off a one-timer from Flames forward Lee Stempniak. The two sides headed into the third period still dead locked at two a piece but Edmonton were clearly on their heels.

The Oilers came out with a different level of intensity in the third and were rewarded with the go-ahead goal. Ryan Nugent-Hopkins, who was checked extremely tight by the Flames, broke free long enough to score his twelfth of the season and put the home side in front one more time. Unfortunately for Edmonton, the lead lasted all of forty-four seconds.

Jarome Iginla stole the puck off Hordichuk, in the Flames end, and was allowed to transition the puck up ice, without being touched. The Calgary captain promptly fed a streaking Derek Smith at the Oilers blueline, and the defencemen broke in all alone and snapped a perfect shot under the bar to even things at three.

To Edmonton's credit, they came back hard after the Flames tied it up but veteran Ryan Smyth killed that momentum, by taking an absolute bone head goaltender interference penalty. Smyth not only ran into the Flames goaltender but knocked Kiprusoff right over and the Oilers would pay for his mistake.

During the late stages of the penalty kill, the trio of Eric Belanger, Ryan Jones and Theo Peckham made the horrible decision of making a line change with the puck just outside the Edmonton blueline. The three didn't hustle off the ice and the three jumping on were late getting back into the play. To make matters worse, defenceman Jeff Petry blew a tire at the blueline and the end result was  Mikael Backlund banging in his first of the campaign, without an Oiler insight. The comedy of errors cost Edmonton dearly.

The Oilers was given one more chance to even things up, when Jokinen took a slashing penalty with just under four minutes to play. Edmonton came into the game with the leagues best power play on home ice but the Flames shut it down completely. Edmonton was 0 for 6 on the PP and generated all of one shot on goal, while Calgary went 2 for 3 on the man advantage. In a nutshell, that was the difference on the night.