Trouble On The Penalty Kill 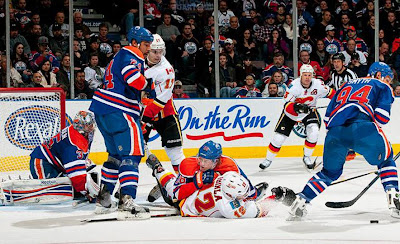 With the Edmonton Oilers recent struggles, the teams penalty kill has started to take a bit of a nose dive. In the last seven games, they have given up nine goals and have a been running with at a success rate of 63%. Not surprisingly, Edmonton has gone 2-4-1 during that stretch and have watched their penalty kill fall all the way down to sixteenth in the league.With that being case, I do find it odd that the coaching staff has made no changes to the clubs current set up. The challenges they are faced with on the blueline, they can do nothing about, until management brings in reinforcements from outside the organization. That being said, there is nothing keeping them from changing things up, with the forward pairings they are currently using.

By tweaking the players on the PK, it will allow the coaching staff the opportunity to give some guys a larger or new role, on top of their regular duties, while limiting time of other players that are being asked to play unrealistic minutes on a nightly basis.

The clubs current set-up tends to look like this, on most nights:
What I would like to see them try is the following:
Personally, I have never found Ryan Smyth to be that effective of a penalty killer and should only be used in  that role as your third option. Yet, this coaching staff often uses him in the top pairing and it is more then puzzling. They have a player in Petrell that was brought in for the sole purpose of killing penalties and he's on the third unit? Has no one else noticed, that the forwards have been blocking far fewer shots, of late, on the kill. In my mind, that is a direct correlation with moving Petrell from the top two units. The guy is an elite penalty killer and this staff is going to play both Smyth and Ryan Jones in front of him? Sorry but that doesn't make any sense.

Second, by adding Paajarvi back into the mix, they can find Magnus more minutes and having him play with Lander is more often then not, a good thing. The Swede did mention that he enjoyed being on the penalty kill at the start of the season and it helped him get into games early. The other part of the equation, is getting # 94 off the PK entirely. Smyth is clearly tired and the team hasn't even hit the thirty game mark. His minutes need to be reduced and he is far less effective when the Oilers are short handed, then when they are on the power play or five-on-five. He has been getting close to three minutes, most nights, on the penalty kill and by removing those minutes entirely, it will bring him down to a much more manageable amount number. In all honesty, Ryan should not be playing more then 15 - 17 minutes most nights and removing him from the penalty kill, should get him right in line with those numbers.

That brings us to Shawn Horcoff. The captain usually is sent out on the first unit to kill most penalties and that job should be landing on the plate of Eric Belanger. The former Phoenix Coyote, is the better faceoff man, plays fewer minutes and is hence, better equipped to deal with the first line role on the PK then the captain. This will give them the option of shaving off some of  Horcoff's ice time. Like Smyth, he is playing far too many minutes and the club would be best served, if they could find a way to limit his minutes.

Teams that are successful killing penalties, more often then not, have strong five man units and quality goaltending to fall back on. While the Oilers had all of those going for them earlier in season, that is no longer the case. How I see it, just sitting around and hoping things get better, is no way of finding a solution to the problem.
Posted by Oil Drop at 11:45:00 am