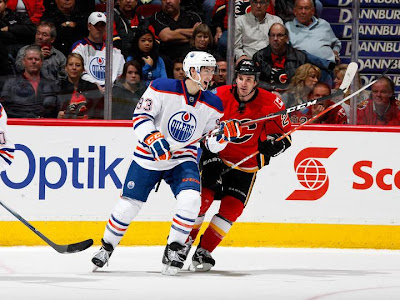 Looks like Renney has decided to go with size and is leaning towards having Paajarvi sit this one out. This comes as no surprise, as it was an automatic that Hordichuk was going to draw back in against the Flames. It was just a matter of who was going to be headed to the press box. The Oilers will definitely have one of their heaviest lineups of the season, going tonight in Calgary.

With the Oilers playing one of their best all around games in sometime, you would think the lineup would remain the same. Only change I could see would be adding tough guy Darcy Hordichuk back into the mix. With Eager playing well it would have to be one of Paajarvi or Petrell to come out and my money would be on the Finn sitting this one out. Paajarvi tends to play well against Calgary but having another guy who will take the body in the lineup is never a bad thing. Tough call but Magnus should be playing if he is here.

Outside of losing his mark on the lone Colorado, Colten Teubert was decent in his return to the lineup. He once again was one of the more active Oilers when it came to throwing his weight around. The big defenceman delivered four hits on the night while playing just under seventeen minutes on the night.

Jeff Petry looked much better against the Avs, after having two stinkers against the Canes and Flames. The staff decided to use Petry on the top power play against the Avs and youngster was solid on the point. He moves the puck well on the man advantage and is a very nice compliment to RNH.

I had hinted that Khabibulin should get the start against the Flames, if he had strong outing against the Avs and apparently the coaching staff were thinking along the same lines. With the Oilers not playing again until Thursday in Phoenix, there is no reason why the veteran netminder can't start on back-to-back nights, after having five days off.
Posted by Oil Drop at 11:19:00 am