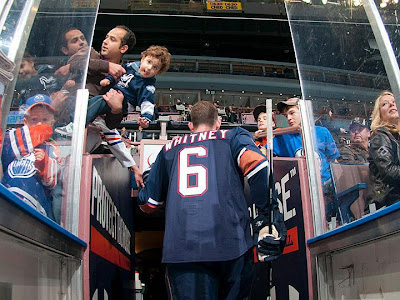 Edmonton sits with a 4-8-1 mark in their last thirteen games and certain deficiencies have become very apparent in their game. In their four victories, the team has scored a minimum of five goals a game but they have averaged 4.50 goals against in the eight regulation time losses. The Oilers seemed like they could do no wrong, early in the season, and it was almost impossible for the opposition to find a way to score on the Oilers netminders. Clearly, that is no longer the case and the lack of quality NHL defencemen, is starting to rear its ugly head. Edmonton has shown the ability to put the puck in the net, with regularity, but this team badly needs an upgrade on the back end. The time has come for Steve Tambellini to go out and acquire the defenceman that this team desperately needs. That is, if they still want to compete for a playoff spot.

About three weeks ago, I put together a piece on "Some Possible Targets" that might have been available, to help the Oilers after a rash of injuries hit their blueline. One of the names I mentioned as a possible fit in Edmonton, was Hurricanes defenceman Tim Gleason. The rugged blueliner's style of play is exactly what this team needs and in my mind, he should be the player this club is looking to acquire.

With Carolina currently sitting at the bottom of the Eastern Conference standings, the organization will obviously be looking to bring in pieces that will help the club in the future, rather then this season. The Canes have four pending UFA's on their current roster: Gleason, Tuomo Ruutu, Bryan Allen and Alexi Ponikarovsky. While they won't get much of a return for Ponikarovsky, the other three should all fetch a nice combination of picks and or prospects. As it stands, Edmonton has the means necessary to put together a package that could easily entice Hurricanes General Manager Jim Rutherford.

From Rutherford's perspective, Gleason is a bit of an interesting situation. Back in 2006, they acquired him along with current Oiler forward, Eric Belanger, in exchange for former third overall draft pick, Jack Johnson. They gave up a pretty good player to bring Gleason into the fold so they won't be giving him away for nothing. That being said, as good as the eight year veteran is, stay at home D men don't usually net clubs a huge return via trade. So what do the Edmonton Oilers have that might peak Mr.Rutherford's interest?

Taking a look at the prospect pool of available players, the name that stand out is Linus Omark. At this point, no one really knows how good Omark can be but I think everyone is in agreement, that he belongs in the NHL. The talented Swede could be a nice addition to a group that already has the likes of Eric Staal and Jeff Skinner but it is not deep when it comes to their top six forwards. That seems like the opportunity that Linus was hoping to get in Edmonton, that never materialized. Omark will still be out of action for a few more weeks, while he recovers from a broken ankle but I think it could be a great fit for both the Canes and Linus.

Second, would be one of the Oilers young and rugged blueliners: Theo Peckham or Alex Plante. In Plante, they would be getting a hulking stay at home defenceman that hasn't yet made the jump to the NHL on a regular basis but is still only 22 years old and is starting to find his game at the pro level.

Peckham is a similar player but much further along in his development. Theo has been a regular for the last two seasons in Edmonton and is going through the growing pains that nearly all NHL defencemen have to deal with. Peckham just turned 24 years old and would add a nice element of toughness, that the Canes will desperately need after they move Gleason and Allen. He's tough as nails and will always come to the defence of a teammate.

While the Oilers would not be willing to move a first round pick to acquire Gleason, they would have to look long and hard at including their second or third rounders, if it meant they would land the 6'0, 217lbs defender. Edmonton is at the stage where they no longer need to collect draft picks but rather use the odd one to improve their current roster.

From Edmonton's stand point, the glaring holes on the backend need to be plugged up and quickly. While they will be getting back Corey Potter from injury in the not to distant future, he will not be enough to right what has started to become a sinking ship. The smoke and mirrors act worked for a while but that time has come and gone.


If this team were able to bring in Tim Gleason, suddenly things looks a whole better:


The top two pairings would play twenty plus minutes a night, which would leave the remaining seventeen or so minutes for Potter and one of Sutton or Peckham, if he were not included in the deal to bring in Gleason. That would give Edmonton three solid pairings, that would have size and puck moving ability. It would also add another veteran presence on the back end, which has clearly been an issue. is it the best D core in the league? No it's not but it would be more then capable of holding it's own on a nightly basis.

It is all well and good for this organization to ride with their young group of  forwards upfront but it is another thing entirely, to try and a get away with a similar formula on the back end. Don't get me wrong, it's perfectly fine for management to not try and upgrade their current roster but if that's case, don't pretend like the goal is to make the Stanley Cup Playoffs. They will make it interesting, of that I have little doubt, but without that upgrade, this team doesn't have a hope in hell of qualifying for post season play.
Posted by Oil Drop at 3:04:00 am