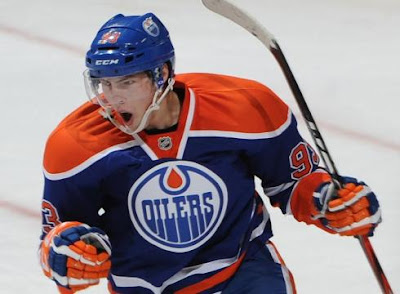 
Eager does draw back in but for Hordichuk. You would think, the duo will be in the lineup against the Avs and Flames on the weekend. Calgary for obvious reasons and they need to get a pound of flesh against a certain Colorado defenceman come Friday night.

Tonight will mark the return of Anton Lander to the Oilers lineup. The young Swede has missed the last three games with a hand infection but he is fully healed and ready to go. Lander will assume his usual spot on the fourth line but it is uncertain who he will have on his wings. Ben Eager says is ready to go after dealing with a sore back in recent weeks so don't be surprised to see # 55 back in the lineup. I am just going on a hunch here but I think we'll see the Eager - Hordichuk tandem tonight. Eager needs to pick up his overall intensity and playing alongside Hordicuk might just be what he needs, to get his game going.

The Canes suffered a 7-6 loss last night in Calgary so the Oilers will have a tired club on their hands and w\one that has given up a league worst 101 goals against. Sounds like a perfect fit, for another big night from Ryan Nugent-Hopkins and Jordan Eberle. If Edmonton can get in front by a couple early, look for them to roll all four lines. With three games in the next four nights, I would think that coach Renney will look to keep the troops as fresh as possible.

It will be status quo on the backend as there will be no changes. Lets hope Jeff Petry rebounds nicely from a his horrendous effort against the Flames on Saturday.

With the Canes in town, it will be a chance for fans to take a closer look at defenceman Tim Gleason. I still feel he should be the Oilers number one target on the trade front and lets hope he leaves a lasting impression on Edmonton's management team.

Looks like they've Decided to go with Dubnyk tonight instead of Khabby. Big opportunity for Devan because he will be starting two of the next three by starting tonight. This is a good time to give Khabibulin a nice rest, full week off, while giving Dubnyk a chnace to show what he can do. Good call by the coaching staff.

Though Khabibulin lost his last outing on Saturday night, one would have to expect to see the Oilers  number one guy in between the pipes against the Canes. With three in four nights, Devan Dubnyk will be getting into one of the next two games and my guess would be he'll start against the Flames on Saturday night.
Posted by Oil Drop at 10:41:00 am