The Difference Between Ottawa and Edmonton 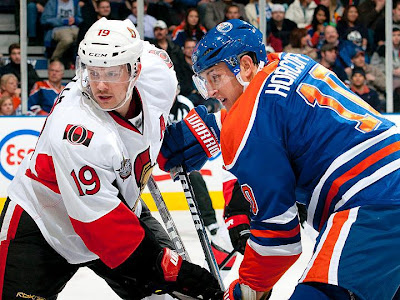 Heading into this season, many felt the Edmonton Oilers and Ottawa Senators would struggle mightily in their respective conferences. I expected the Oilers to be the better of the two clubs this season but the Senators would take strides towards becoming a much improved club, as early as next season. After losing their first five games of the season, the Sens turned things around and like Edmonton, found themselves near the top of the NHL standings heading into November. Not surprisingly, both clubs slid down the standings as the season moved along but there has been a big difference in how far each club has slipped. While Edmonton has plummeted down to thirteenth in the West, the Senators have managed to stay in contention and are currently in fifth spot in the East. So what has been the big difference between the two sides in the last two and a half months? That answer is easy...the play of their veterans.

While both are up and coming teams, their re-builds have been constructed differently. The Oilers have focused on building upfront by drafting the likes of Jordan Eberle, Taylor Hall and Ryan Nugent-Hopkins in recent years. Where as the Senators have the likes of Jared Cowen and Erik Karlsson playing regularly on the clubs blueline and contributing on a nightly basis. All five players already play major roles on their teams and have been successful in making the transition to playing in the NHL on a full time basis.

Edmonton has had their fair share of injuries to deal with but their longest serving members have been down right awful over the past month and a half. On the other side of the coin, Ottawa has been getting production from their vets for much of the season and unlike the Oilers crew, they have stepped up their level of play as the season has progressed. Just look at the stats and they will tell the whole story.

Jason Spezza leads Ottawa with forty-seven points and already has nineteen goals on the season. Milan Michalek is tied for third in the league with twenty-three goals and while captain Daniel Alfredsson isn't the star player he once was, he has still managed to put up thirty-one points and has come up huge in a number of shootouts for the Sens.

The Oilers on the other hand, have received nice production from Ryan Smyth but even Mr. Edmonton Oiler hasn't done a whole helluva lot of late. Of his thirty-two points, only eight have come in the past twenty-two games. Ales Hemsky, who like Spezza, refuses to shot the puck at times, has all of four goals and sixteen points on the season. Captain Shawn Horcoff started off strong this season and Edmonton was winning games but in his last seventeen he has three points and has gone -13...this from a guy who plays more minutes then any other forward on a nightly basis. That doesn't even include Eric Belanger and his one goal in forty-three games. Obviously not the production Edmonton was hoping to get from their most seasoned players and hence why their struggles should come as no surprise.

It is rarely a good thing to allow your future core players to develop at the NHL level but if you are lucky enough to have players that are capable of playing in the league, while still contributing to your teams success, you are one of the fortunate few. In Edmonton and Ottawa both clubs are blessed with having such a luxury but unfortunately, only one of them have veteran guys that have been able to contribute on a regular basis..
Posted by Oil Drop at 3:06:00 am