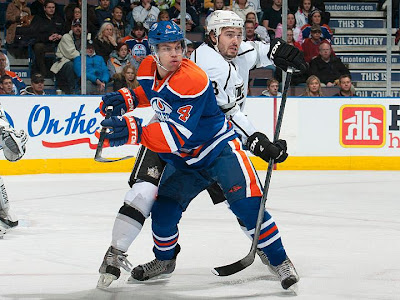 After suffering their fifth consecutive loss at the hands of the Anaheim Ducks, coach Tom Renney started to question this clubs ability to compete in his post game comments. He nor the fans liked what they witnessed at Rexall Place on Friday night and hopefully the players got the message loud and clear. Not only did they respond but they played arguably their most complete game in ages. Granted, they were up against a tired Los Angeles team that  played the night before in Calgary and thumped the Flames but the Oilers got the job done, Taylor Hall scored 3:06 into overtime to give Edmonton a well earned 2-1 victory and snap their season high five game slide.
Edmonton came out flying and were playing like a team that had something to prove. They were banging bodies from the outset and taking the play to a lethargic looking Kings side. If not for the strong play of Kings netminder Jonathan Quick, the Oilers would have put this one too bed early on. After having numerous chances but unable to slip one past Quick, it was the unlikeliest of sources who would get the home side on the board.
As an Edmonton power play was about to expire, Josh Green manged to re-direct a Jeff Petry point shot past the Kings netminder. That was Green's first NHL marker since 2007, when he was a member of the Vancouver Canucks. Green found himself in the lineup because of an injury to centre Eric Belanger and the veteran made the most of his opportunity. Los Angeles were given a man advantage late in the frame but manged very little and the two sides went to the dressing room with the Oilers up by one and holding a 12-6 advantage on the shot clock.
The Kings looked like a totally different team to start the second and had the Oilers pinned in their end for the opening three minutes of the period. Pressure aside, L.A. never really got many clean looks at Devan Dubnyk as the Oilers kept everything to the outside. With Anze Kopitar in the box serving  a holding minor, Edmonton threw everything but the kitchen sink at Quick but couldn't find a way to beat the twenty-five year old. Quick had been bleeding rebounds all game long but manged to stop every second or third chance shots thrown in his direction. From that point on, Edmonton carried much of the play in the middle stanza and widened their shot advantage to 25-14 while maintaining their one goal advantage.
Ryan O'Marra would pick up a slashing minor all of nine seconds into the final frame but once again, Edmonton killed off the penalty with ease and never allowed the Kings a chance to even gain position in the Oilers zone. After exchanging the occasional chance during the early portion of the third, L.A. would finally tie things up at the 6:22 mark. Justin Williams neatly deflected Slava Voynov's blast past Dubnyk for his eighth on the season and suddenly the visitors had life.
Los Angeles would get another shot on the power play, when Ladislav Smid took an undisciplined tripping penalty with less then four minutes to play but just like the Kings previous two chances on the man advantage,
the created nothing and the two sides found themselves heading for overtime.
Nothing of note occurred during the opening minutes of the extra period but that changed when Williams was whistled down for raking Theo Peckham across the face, with just over two minutes remaining in the four-on-four overtime.
Edmonton went away from the norm and decided to send out a four forward power play uinit and it only took them a matter of seconds, to put this one away. After stopping an Ales Hemsky point shot a down and out Quick was left helpless, as Shawn Horcoff sent a beautiful no-look between the legs pass, to a wide open Taylor Hall...who made no mistake. The goal was the red-hot wingers fifteenth on the campaign and ninth power play goal, which ties him for third best in the league with Detroit's Johan Franzen.
The game marked one of the best performances of the year for Hemsky, who is in the midst of the worst season of his career and is constantly mentioned in trade rumours that would see the talented Czech's time in Edmonton come to an end, after nine seasons. When he puts on a performance like that, one wonders why the Oilers would even entertain the thought of moving him but those games have been few and far between.
Edmonton now heads out on a brief two game trip to Columbus and St.Louis and then head back home to take on their provincial rivals next Saturday night, on Hockey Night in Canada.
Posted by Oil Drop at 2:56:00 am