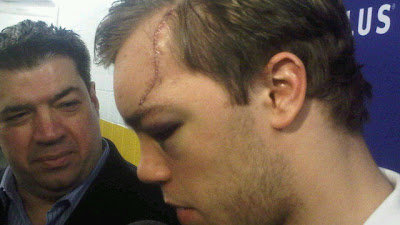 Taylor Hall met with the media on Thursday morning to discuss his freak accident/injury on Tuesday night in Columbus. I have placed a link to the video below but all I can say is the kid is all about the team. He just has his skull cut open and after he is stitched up, he jumps on the bike to show he's good to go but his gash started bleeding...how shocking! Hall just wants to play and help this team win and this organization is very fortunate they stunk when they did and were able to draft this type of player. He is going to be a special player in this league for a very long time.

Now that everyone has seen how severe the cut actually is, there should be absolutely no rush to get the former number one overall selection back into the lineup. While Taylor may want to get back in on Saturday against the Flames, you would think the organization would not allow him to play another game until after the All-Star break. Their season is toast and having Hall miss four games instead of one or two and giving him two full weeks to recover, makes the most sense. Also, it will allow the youngster time to deal with what I am sure is a very difficult situation.
Posted by Oil Drop at 11:57:00 pm