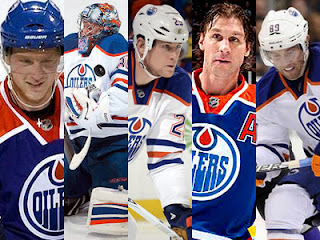 With the Edmonton Oilers no longer in playoff contention, the club will have some very interesting decisions to make, leading up to the NHL Trade Deadline. This year's D-Day is Monday, February 27, 2012 at 3 pm EST and the Oilers look as though they could be a major player. With likely the most sought after UFA pending forward available being Ales Hemsky, one can expect GM Steve Tambellini will be fielding his share of phone calls leading up to the deadline. How I see it, the Oilers have five players that may interest more then a few teams that are looking to shore up their roster and make a run at a possible playoff spot or a shot at winning the Stanley Cup.

1) Ales Hemsky - The Oilers are in a tough spot with Hemsky. They could definitely use his skill set to help round out their top six but does he fit into the clubs future plans? Money wise it could be tough but moving forward with another player that lacks size on their top two lines, seems unlikely. While Hemsky has been rumoured to possibly be heading to places like Detroit, LA and Pittsburgh...come deadline day, I honestly think the talented Czech winger could end up anywhere. Hemmer has mega talent and for Edmonton's sake, lets hope for a bidding war that will drive up the price for number eighty-three. At the very least, the Oilers will get a similar package for Hemsky that they received for Dustin Penner at last year's deadline. Though I do expect Ales to fetch a little more, if there turns out to be a bidding war.

2) Nikolai Khabibulin - The extra year on the veteran netminder's contract at $3.75 million could be a stumbling block for teams looking to acquire goaltending help for the playoffs but there might be a fit out there. Two possible destinations, could be city's in which the former Stanley Cup winner had previously starred in. The Winnipeg Jets goalie of the present and the future, appears to be Ondrei Pavelec but adding an experienced goaltender like Nikolai into the mix, would only makes things better. He not only would give the Jets that presence that only veteran goaltenders can give a club. Also, it would force Pavelec to push his game to that next level but still allow him time to grow into that number one role. Khabibulin has been a wonderful mentor for Devan Dubnyk and I would expect he would do the same for the talented Czech.

Same idea in Tampa Bay, where the Roloson/Garon tandem has failed miserably. While many expect the Bolts to go out and acquire a young netminder via trade in the off-season, it  would make sense to add an established veteran presence, that can still play, for one year to help with the transition. Edmonton wouldn't be looking for much of anything in return for the 39 year-old so it would be a no lose situation, for a team in need of help between the pipes.

3) Andy Sutton - The rugged blueliner has been far better then almost anyone expected, since being acquired from Anaheim. Sutton has been a stabling influence for the young Oiler defencemen, that have been forced into far more action then expected, due to injuries. Andy really seems to have enjoyed his time in Edmonton and appears interested in re-signing for the 2012-2013 season. Having said that, the type of game he plays will make him sought after by many teams looking to add depth for the playoffs. It is almost a guarantee that the Oilers would get a decent draft pick for Sutton and they would frankly be foolish to not turn that asset into something. Those extra picks could come in very handy, when they are looking to upgrade areas of need in the off season.

4) Ryan Smyth - Barring a ridiculous contract request from Smyth, it is pretty much a forgone conclusion that the two sides will agree to an extension to keep Ryan an Oiler. He wants to be here and this organization and their fans want him here. Being that as it may, if Smyth wants an opportunity at winning a Cup before he retires, this might be his best shot. I would bet every team looking to add at the deadline would inquire about the veteran winger, if he was made available by Edmonton. If Smyth is game and is willing to resign in the off season, Tambellini would have to get his head examined if he didn't move him.

5) Sam Gagner - The chances of Gagner moving at the deadline are practically zero but if a team were to come to the Oilers with a legitimate offer, that includes a young blueliner coming back in return, Edmonton would have to think long and hard about it. Sam is in no way guaranteed to be here come next season but if the organization decides to move him, it seems much more likely for it to be done on draft day, rather then trade deadline day.

After watching the courage the youngster displayed when he decided to take on the Ducks Francois Beauchemin, it tells me Sam wants to be an Oiler and if I had it my way, he would remain an Edmonton Oiler for a very long time.