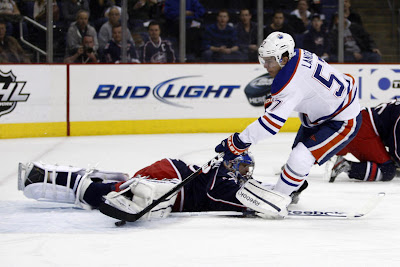 The frequency in which the Edmonton Oilers are losing players to freak injuries is becoming almost comical. With star forward Taylor Hall getting injured in an accidental but scary skate to face collision with teammate Corey Potter, during the pre-game skate, you would think this franchise is due a bit of good fortune. Unfortunately for the Oilers, their string of bad luck and ability to blow leads continued last night in Columbus. The Blue Jackets fought back from an early two goal deficit and defeated the severely under manned Oilers side by a score of 4-2. The win moves Columbus to within seven points of Edmonton in the race for fifteenth place in the West.

To Edmonton's credit, the club came out hard after watching their fallen teammate leave the ice with blood pouring from head, only moments earlier. After generating some early chances but coming away empty handed, it was rookie Anton Lander who would open the scoring just over seven minutes into the proceedings. Lander was sent in all alone when Josh Green's pass deflected off a Jackets player and directly onto the blade of the streaking Swede. Lander made no mistake, as he left Jackets starter Curtis Sanford swimming on the ice after depositing the puck into the open cage.

Just under two minutes later, Ben Eager would make it 2-0 when he banged in his fifth of the season on a great feed from defenceman Jeff Petry. Ales Hemsky tried hitting the hard charging Petry but Fedor Tyutin deflected the puck towards the end boards. Unfortuantely for Tyutin, the puck ricocheted off the boards directly to Petry, who then sent a beautiful no look backhand pass to an unmarked Eager.

Considering what happened during warmups, not much more could have been expected from the visitors...the same can't be said for the final forty minutes.

Early in the middle frame, the Jackets would cut the lead to one when forward Ryan Johansen potted his eighth goal on the campaign. Johansen and Antoine Vermette worked a perfect give-and-go which sent the rookie in with a head of steam and he beat Deavn Dubnyk with a quick shot, that found its way between the netminder's pads.

The score remained the same until Columbus would tied it up with on a lucky bounce. With time running out in the period and the Blue Jackets on the power play, Dubnyk made an outstanding pad save off Derick Brassard but the puck ricocheted off Petry and back into the down and out Oiler netminder, who knocked the puck into his own net, with less the second left in the period. Tough break from Dubnyk and the Oilers but the game was still tied and there for the taking in the third.

It took Columbus all of thirty-two seconds to break the deadlock, when Derek MacKenzie took a nice feed from recently acqiured Colton Gillies and deposited his fifth of the season into a gaping Oiler net. Not exactly the start Edmonton wanted or needed. They could muster next to nothing the rest of the way and fell for the sixth time in their past seven contests. With the loss, Edmonton fell to 2-5-1 in January and are only one point ahead of the red hot Anheim Ducks for thirteenth place in the Western Conference.

As far as Taylor Hall goes, the youngster required thirty stitches to repair the gash that was done by Corey Potter's skate. Hall inadvertently stepped on a puck during warmup drills and promptly fell to the ice and collided with teammate Ladisalv Smid. The collision knocked Smid to the ice and on top of Hall and as the two slid towards the side boards, they ran into Potter. As he attempted to avoid his teammates, his skate blade came up off the ice and accidentally clipped Hall near the eye area.

Captain Shawn Horcoff, one of the first on the scene to assist the sophomore winger, said the cut went from just above the eyebrow to his hairline and that bone was visible. Obviously not a good situation but it could have been a whole lot worse and in typical Hall fashion, the kid wanted to play after to being stitched up by the plastic surgeon team in Columbus. Thankfully, he was kept out of the lineup and barring any sort of setback, I would expect to see Taylor back in the lineup on Thursday in St.Louis.
Posted by Oil Drop at 9:29:00 am