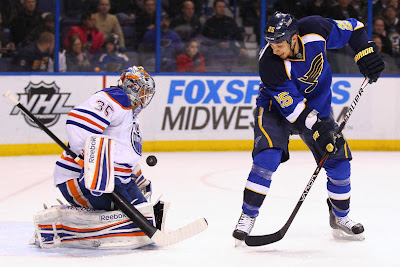 Despite a Herculean 37 save performance from netminder Nikolai Khabibulin, the Edmonton Oilers managed to continue on their losing ways. Edmonton were simply outclassed and dominated by a St.Louis Blues side that are currently firing on all cylinders. Goaltender Jaroslav Halak had to make only 15 saves in earning his second consecutive shutout...both by the identical score of 1-0. While leading scorer Jordan Eberle returned to the Oilers lineup after missing the previous four contests, the club were without star winger Taylor Hall, who is out indefinitely after being cut for thirty stitches in a scary accident during warmup on Tuesday night in Columbus.

Even with the return of Eberle to their depleted lineup, Edmonton came out flat as board to start and if not for their goaltender, this one would have been done five minutes in. The Blues out shot the Oilers 19-4 in the first but held a 17-0 lead just over seven minutes in. Hard to believe when you are up against one of the best teams in the league that you would be that unprepared to play but that's exactly what happened. Not a good sign from a team that has now won only four of the previous twenty games. Edmonton were given a late power play and generated a few chances before the period ended but were unable to beat Halak.

Tom Renney obviously woke up the troops in the intermission as they came out with a little more jump in their game and played the Blues even in the middle frame. Having said that, the second period was about as exciting to watch as the wall I painted earlier in the afternoon. Not much happened and the home team seemed comfortable coming down to Edmonton's level for twenty minutes because they still had the puck the entire period.

Once the third period began, St.Louis took it to another level and there was simply nothing the undermanned Oilers could do to slow them down. They came in waves and again, if not for Khabibulin the Blues would have opened the scoring early in the frame. The veteran netminder's best stop of the period came at the midway point when he made a big pad save off a hard charging Patrik Berglund. The shots were 7-1 for the Blues at that point and it was clear that if this game was going to get to overtime, it would be up to Khabibulin to do it on his own.

Unfortunately, with just under six minutes remaining and St.Louis swarming the Oilers, the 'Bulin Wall finally broke. Edmonton looked like the were in the middle of the most disorganized fire drill I have ever seen and the Blues made them pay. David Backes fed a streaking Alex Pietrangelo with a beautiful backdoor pass but the talented defender was unable to convert on a wrap around attempt. Not to worry, as the Blues quickly regained possession and the puck found its way back to Pietrangelo, now on the opposite side of the net, and the youngster would make no mistake on his second wrap around attempt. The goal was the twenty-one year old's seventh of the season and third against Edmonton in three games.

The Oilers pulled Khabibulin in the final minute of play and managed to nearly knock one in on a scramble play but it was not meant to be. The club heads home from their brief two game road trip with an 0-2 record and minus the services of their best player...not exactly the trip they were hoping for.