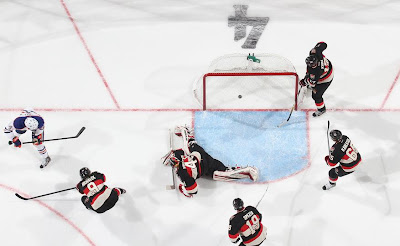 After paying tribute to Phillips in a pre-game ceremony for recently playing in his 1,000th career game, it would be the Senators who would come out flying. Daniel Alfredsson would put Ottawa in front with his nineteenth of the year to give the home side the lead just 4:26 into the proceedings. That score line would hold until the intermission but the only reason this one was close, was the Oilers goaltender. Khabibulin made sixteen first period stops, many of which were of the highlight reel variety.

The middle frame featured a plethora of chances from both sides but neither netminder would budge. That all changed at the 14:05 mark, when Paajarvi banged in a rebound to even things up. Ales Hemsky made a great play leading up to what must have felt like a milestone goal to the young Swede. Magnus was Johnny-on-the-spot to bury the juicy rebound left by Craig Anderson and looked to the heaven's after ending his goal scoring misery. It was obviously a huge moment for the second year winger and it gave his side new life.

Unfortunately, it would take the Sens less then three minutes to regain the lead. After setting up Edmonton's opening goal, Hemsky would turnover the puck at the Ottawa blueline and seconds later, they found themselves 2-1. Jason Spezza sent in Milan Michalek with a lovely pass and the talented winger made no mistake, scoring his twenty-fourth of the season and first in thirteen games.

Edmonton would manage to tie things up before the period was out, courtesy of Ben Eager. Eager broke in on a partial break and beat Anderson with just over a minute remaining, to even things up. The open space the speedy winger found, came to fruition thanks to a timely pick from the Oilers Ryan Jones. While the Sens were unhappy with the non-call, the fact remained this game was knotted at two heading into the final frame.

The Oilers wasted little time in securing their first lead of the afternoon, when Hemsky setup Shawn Horcoff for an easy tap in goal, just forty-two seconds in. The goal was only the third in the past thirty-three games for the struggling centre but it couldn't have come at a better time. Hemsky and Paajarvi both picked up assists, giving Edmonton's second line six points between them and the secondary scoring this club had desperately been waiting for.

This time it was the Senators turn to come back, when defencman Erik Karlsson would fire his ninth of the year through a maze of players and past Khabibulin to tie it at three, with just over ten minutes to play.. Defenceman Jeff Petry had a chance to move the puck up ice and out of danger but instead saw his clearing attempt land directly on the stick of the Sens talented blueliner.

Edmonton came close to ending it in regulation but Anderson stoned Sam Gagner at the doorstep with  a brilliant blocker save with less then ten seconds to play. Just like the third period, it would take the Oilers a matter of seconds to find the back of the net and it was their star pupil who would get the job done.

After being benched in the opening period and not having much luck throughout the afternoon, Taylor Hall would make amends by scoring his nineteenth of the season and end this one in overtime. Hall flew up the ice after picking up the puck in his own end and fired a quick shot from the sideboards that Anderson stopped but kicked directly into the slot. A streaking Horcoff would pick up the rebound but he partially whiffed on his attempt and allowed the Senators netminder to scramble over and make the stop but the freewheeling Hall came from behind the goal and would bat the winner out of mid-air and into a gaping net for the win.

The victory gave Edmonton a 1-2 mark on their three game road trip and was just the seventh time the club has picked up a W away from Rexall Place this year. They now head home, where they will play seven of their next nine games, starting on Wednesday night when the Toronto Maple Leafs come to town.