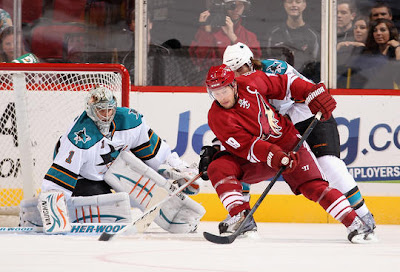 While the Phoenix Coyotes captain isn't the same player he was five or six years ago, he is still more then capable of filling a top six role on any NHL roster. In place like Edmonton, that could desperately use his size, leadership and skill set, Doan could be re-born. The thought of potentially having him line up alongside Taylor Hall for a couple of seasons, might just be a good enough reason for both the Oilers and the former seventh overall selection to seriously consider such a move.

Shane is looked upon as one of the better leaders in the game and having him bring those qualities and experiences into Edmonton's dressing room couldn't be a bad thing. While most people in hockey circles are expecting the Oilers to re-sign Ryan Smyth for the next year or two, the addition of a player like Doan could be the perfect compliment. Both players are past their primes but both still have plenty to offer, if they are used properly. There is no need to play them to death at their advanced age...especially for a team like Edmonton who have the thoroughbreds needed to make it easier to work in aging former star players.

If you were to take a quick peak at the Oilers potential forward roster for the 2012-2013 season and you add in Shane Doan for Ales Hemsky, they could look something like one of these:


Whatever the combination, the fact is that the addition of a player like Doan would give the Oilers a whole different dimension. In a perfect world, it would be ideal to look at moving one of Shawn Horcoff or Eric Belanger but they may be better off waiting another year before going down the road. Adding a player such as Doan would allow them to bring Teemu Hartkainen along slowly while being mentored into his role by both Smyth and the former Winnipeg Jet. I also see him as a good veteran presence for a player like Hall. Doan has never taken any short cuts during his NHL career and Hall strikes me as a similar player. With Taylor, it's all about the team and his drive to want to win seems extremely high. He will not settle for second best and having a player like Doan to help him through this teams growing pains, could be priceless.

While he isn't the threat he once was upfront, he can still hold his own. He should once again hit the 20 goal plateau this season, making 2009-10 the only year he has failed to score at least twenty goals in the last twelve years. Also, playing alongside the likes of a Hall, Eberle or Nugent-Hopkins will allow the veteran winger to continue to collect points while playing a slightly different role. The two-time thirty goal man would be looked to for leadership and secondary scoring but he would no longer be burdened with having to carry the load. The way this team is currently structured, they have those pieces in place. What they need to bring in, are the right complimentary parts to make this thing fire on all cylinders. Obviously they need to upgrade their backend to make that next push but they still have holes upfront that can need to be addressed. The size issue upfront is something that isn't going away and bringing in a player with Doan's size to play top six minutes along with adding Hartikainen into the mix, would help this club immensely.

While there is a chance that Shane Doan may be moved on or leading up to the February 27th Trade Deadline, the possibility of him re-signing with the Phoenix Coyotes still exists. Having said all that, the potential of the sixteen year NHL veteran being available come July 1st, is also a very real possibility. If the Edmonton Oilers go the route that most expect them to go on February 27th, then they need to seriously look at bringing home the Alberta boy home. This organization already made the mistake of not drafting him back in 1995, despite their fans "Doan, Doan, Doan"chants that were ringing in the ears of the Oilers scouts and management team. It would be an absolute shame to see them pass up on him one more time, if the opportunity to acquire him presented itself.
Posted by Oil Drop at 6:24:00 am