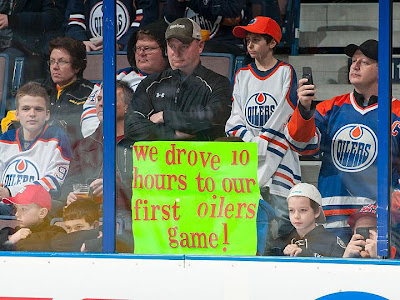 In what was a very sluggish opening frame, neither side created much of anything but an ill advised pass from goaltender Devan Dubnyk would prove costly. The netminder decided to wonder out of his goal to play the puck in the final minute and made a poor clearing attempt behind the Oiler goal that was intercepted by O'Reilly. Two quick passes later, Eric Johnson had his fourth of the year and Edmonton was down 1-0. Johnson ripped a shot past Dubnyk, who managed to get back to his crease but was clearly not set to deal with the incoming bullet.

Four minutes into the second period, the Avs would make it 2-0 courtesy of call-up Mark Olver's first of the season and second point of the night. The Oilers hung their netminder out to dry, as Olver finished off a beautiful three way passing play between O'Reilly and Gabriel Landeskog.

Six minutes later, Landeskog would notch his fourteenth of the year, on the power play, to give the visitors a three goal cushion. The rookie took a lovely feed from Paul Stastny before burying a shot under the bar and past a helpless Dubnyk. Landeskog is the real deal and along with Oilers rookie Ryan Nugent-Hopkins, the pair will undoubtedly become the two finest players that their draft year will have produced.

Just under a minute later, Edmonton would be given a golden opportunity to get back into this one, when defenceman Ryan O'Byrne took two dumb penalties giving the Oilers a four minute power play. The hulking defenceman had been knocked to the ice on two separate occasions by Taylor Hall and the blueliner wasn't amused. While O'Byrne thought he could throw his weight around against the Oilers prized pupil without much repercussion, the youngster delivered a clear message by knocking the 6'5", 234 lbs defenceman to the ice not once but twice during last night's game.

Unfortunately, the Oilers power play was not clicking and they were unable to muster up a single solid scoring chance with the extended man advantage. Edmonton would go scoreless on their four power play opportunities, directing all of six shots on goal in allowing Varlamov to earn one of his easiest victories of the season.

Edmonton would finally get on the board, when Ryan Jones scored his first goal in twenty-two games as he punched a rebound past the Avs netminder to cut the lead to 3-1. There was five minutes left in the second and plenty of time to try and make a game of this one but it was not meant to be.

The loss drops Edmonton to 15-9-4 on home ice and leaves them fourteenth in the Western Conference and twenty-ninth in league standings, ten points clear of the last place Columbus Blue Jackets.
Posted by Oil Drop at 10:42:00 am