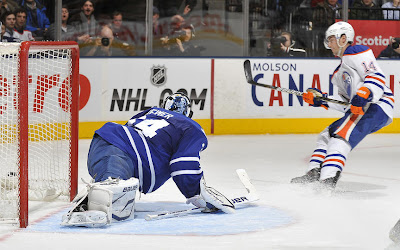 Look for James Reimer to get the call in goal for the Leafs, while veteran Nikolai Khabibulin will likely get the nod for Edmonton, after putting on a goaltending clinic against the Sens. The Oilers will likely be without defenceman Corey Potter, which means either Cam Barker or a healthy Theo Peckham will draw back in. When you consider how bad Barker looked against the Leafs in Toronto, one would have to think Peckham will get the call, if he's ready to go.

Upfront, Edmonton finally got some secondary scoring from the Hemsky-Horcoff-Paajarvi line against the Senators and not surprisingly, the managed to win the game. As good as the Hall-Gagner-Eberle unit has been of late, if this team has a hope in hell of winning games, they will need scoring from other sources then just the top line. In three career games against the Leafs, Jordan Eberle has four goals and two assists, while Taylor Hall has managed to collect four points in those same three contests.

While the game in Toronto featured a ton of turnovers and poor play in the defensive zone from both sides, I would love to see much of the same on Wednesday night. While the Leafs have the better D core, it is quite evident that neither team could handle each others speed game particularly well and it made for some entertaining hockey. Edmonton had no answers to deal with the Maple Leafs speed of the rush and the Oilers top line had Toronto on their heels, nearly every time they hit the ice.

These two clubs are amongst the most entertaining teams in the entire league to watch, if they are playing the right opponent. With the style of game each side deploys, facing one another should almost guarantee us a night of exciting hockey. As I mentioned earlier, it may not be the most fundamentally sound game you will find on the NHL scoreboard but it will be one of the most entertaining to watch.
Posted by Oil Drop at 12:40:00 am