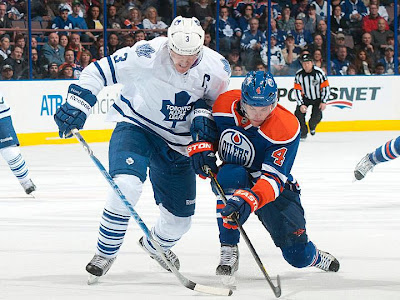 It took the Maple Leafs little time to open the scoring, as winger Joffrey Lupul beat Nikolai Khabibulin with a quick shot at the forty second mark and Toronto would quickly make it a two goal cushion, courtesy of Matthew Lombardi. The speedy winger notched his seventh of the year, after being sprung on a break by a great stretch pass from Cody Franson. For some unknown reason, defenceman Cam Barker decided to ignore Lombardi and allow him to sit wide open in the middle of the ice and the former Flame made no mistake in slipping one past the Oiler netminder.

Obviously, Edmonton were not ready at the drop of the puck but a poor decision from netminder James Reimer, allowed them to get right back into this one. Reimer played what would have been a sure icing call on the Oilers and to make matters worse, he handed the puck to Lennart Petrell behind the Toronto net and one quick pass later, saw Ben Eager raising his arms in celebration of his seven the goal of the year. That made it 2-1 for the visitors and three goals in under two minutes. The track meet was on.

Though the period would see no more goals scored, the pace was frenetic. Both sides brought it and went end to end with one rush after another. Two minutes after cutting the lead to one, Eager would drop the mitts with Mike Brown and laid a beating on the Leafs forward. That electrified the crowd that was rocking all night long and that was 60/40 in favour of the Oilers. As usual, the blue and white supporters were out in full force and the crowds energy on top off the speed and intensity on the ice, made this one almost feel like a playoff game. At the intermission, Toronto held a 14-10 advantage on the shot clock but the Oilers were starting to taking this game over.

Edmonton continued to pour it on in the second and the Leafs in their end on nearly every shift. It was only a matter of time before they would tie it up and as usual, it would be their kids who would get the job done. Taylor Hall would deflect home a Sam Gagner pass for his twentieth at the 8:15 mark and Rexall Place erupted. The Oilers kept coming but they were unable to get the go ahead marker past Reimer, who looked shaky all night and had the good fortune of having four pucks ring off posts behind him. This one was all tied up after forty with Edmonton now holding a 23-17 lead on the shot clock and seemingly carrying the momentum into the final frame.

Both sides would have their chances early on, as Hemsky hit the crossbar early in the period and the Leafs swarmed the Edmonton net on a couple of occasions but were unable to get one past Khabibulin. However, Edmonton would be the one to blink first when Ryan Jones took a delay of game penalty. The hard working Jones simply put too much on his clearing attempt as he braced himself for a collision with Toronto's Colby Armstrong. It took the Leafs all of ten seconds with the man advantage to re-store their one goal lead. Jake Gardiner let go of an absolute bullet that found its way past a screened Khabibulin and suddenly visitors were back in the lead. Defenceman Ladisalv Smid went for the shot block but was unable get in front of Gardiner's rocket, leaving his netminder little chance at stopping the rookie blueliner's blast.

Give Edmonton credit, they continued to press and were finally rewarded with just over four minutes to play, when Jordan Eberle sent a laser beam past Reimer for his twenty-fifth goal of the season. Eberle was in the midst of one of his weaker efforts of the season but he made a brilliant move to strip the puck off the much bigger David Steckel and fight off the big Leaf centre before firing an absolute bullet over a stunned Reimer. The trio of Eberle, Gagner and Hall had Toronto pinned in their end for what seemed like an eternity and it was just a matter of when not if they would knot things up at three.

The Oilers continued to press and were given their first full power play in nearly two full games against the Leafs, when Darryl Boyce was whistled down for hooking Hall with just over two minutes left in regulation. The perfect opportunity to end it, went for not as Toronto kept the Oilers top ranked power play to the perimeter and allowed them next to nothing.

The extra session started off very much like the first period, with both sides going back and forth but the Oilers would get the first great chance. When Magnus Paajarvi and Ales Hemsky broke out on a two-on-one that quickly became a three-on-one when Ryan Whitney joined the rush. The second year Swede decided to send a last second pass back to the incoming Whitney but a great back check from Dion Phaneuf broke up the play and the Leafs immediately turned it up ice for their own three-on-one and they would make no mistake. Connolly would tip home Lupul's pass for his eighth of the campaign and first goal since January 5th.

That poor decision by Paajarvi cost Edmonton but it seemed like a fitting ending to what was a wonderful game. Any way these two teams could  play each other ten times a year? All I know, is I would pay to watch these two go at it every night...in my opinion, it is how the game of hockey should be played.
Posted by Oil Drop at 4:23:00 am