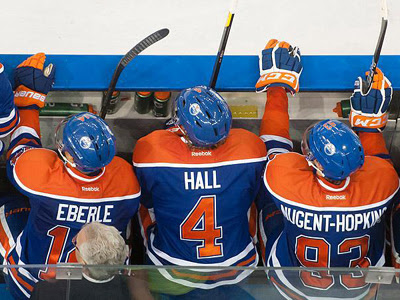 With the month of February now in the books, it's time to look back at the month that was and dish out my monthly report card. Each players rating will be based on their performance from opening night up to and including the teams last game on February 29th. This post will focus on the Oilers forwards and coaching staff.

Eric Belanger - To say that Belanger's first year in Edmonton has been challenging would be putting it nicely. I am sure the team nor the player were expecting Eric to be sitting with only three goals and thirteen points after sixty games. For some reason, the veteran forward has continually been placed in offensive situations, despite his struggles and it has been a point of frustration with most Oiler fans.
Needs To Work On: In Eric's defence, he has been used in a more traditional third/fourth line role for the latter half of February and his game has improved. While nothing Belanger does the rest of the way can salvage this season, it sure can't hurt moving forward to next year.
Grade:D

Ben Eager - The rugged winger continues to impress after a poor start to his first season in Edmonton. He chipped in with two more goals in February giving him seven on the season and his improved play has found him becoming a regular fixture on the Oilers third line.
Needs To Work On: Continue using his speed to his advantage and playing with an edge. When Eager is engaged, he has shown to have the game that is arguably, the beat we have seen from any forward that has played in Edmonton's bottom six, over the last five years.
Grade:B-

Jordan Eberle - What more could you say about this kid? He scored another nine goals last month and continues to flirt with the top ten in league scoring. He has an outside chance of hitting the 80 point barrier and he is doing it, despite playing fewer minutes then any other player in the top thirty-five in league scoring. Without question, Jordan has been this teams MVP.
Needs To Work On: Convince the coaches to give him more ice time
Grade: A+

Sam Gagner - Sam started February off like few players ever have. He kicked things off with a historic eight point performance against the Hawks and followed it up with three points in the opening period against the Wings. Giving him eleven points over a three period span...those aren't Gagner numbers, those are Gretzky numbers!
Needs To Work On: Sam came back down to earth as the month progressed but his improved play has solidified himself a spot in the clubs top six. He needs to stay confident and finish off strong to ensure he holds onto that spot on the top two lines.
Grade: B-

Taylor Hall - The former first overall selection continued being the player that sets the tone for this team, collecting points in nine of the Oilers thirteen games last month. Hall scored six times and picked up fifteen points, as he took over second spot in team scoring. Eberle has been the best Oiler this season but this kid is who makes this lineup go.
Needs To Work On: Continue to build on his chemistry with Ales Hemsky and push to reach the thirty-five goal mark before the season is out. He should be able to hit the thirty goal plateau but I wouldn't put anything past him. In my mind, Hall is the future captain of the Edmonto Oilers.
Grade: A

Ales Hemsky - Ales had his best month of his season and not surprisingly, it occurred once the talented Czech was put on a line with Taylor Hall. The two feed off one another nicely and give Edmonton the potential of two scoring lines with RNH and Eberle on the other unit.
Needs To Work On:  The high point of Hemsky's month came days before the Trade Deadline, when he and the Oilers agreed to a two year extension. The focus needs to be on finishing up strong and moving forward in a positive frame of mind. If Ales continues to work hard, the points will come. He is too good of a player to be sitting where he is in team scoring this season.
Grade: C

Shawn Horcoff - After being played to death all season long, Shawn was finally been placed into a third line role as the month came to a close. With his minutes starting to come down into the "teens" his play will improve. He has always been a better player when used properly. Hopefully, from this point forward, this will be the norm and no longer the exception for the Oiler captain.
Needs To Work On: He needs to go out and work his tail off over the final quarter of the year and show that he is comfortable in his new role and willing to do whatever is necessary, for this club to turn things around.
Grade:C-

Darcy Hordichuk - After sitting for nearly a month on the sidelines, Darcy got back into the lineup for the last five games of the month and he dropped the mitts three times and made his presence felt. When Hordichuk has got into the lineup, he has done all he could with his limited ice time.
Needs To Work On: Keep teams from taking liberties on their star player.
Grade:C-

Ryan Jones -  The fan favourite continued to struggle with his game after scoring at a ridiculous clip early in the season. Jones found himself in the press box for a few games but still managed to score a couple of goals.
Needs To Work On: Ryan needs to play with a bit more of an edge on a nightly basis and remember what he is..a bottom six forward. When he works he's solid, when he doesn't he isn't very good. Having said that, the guy has fourteen goals, which is five more then I was expecting out of him.
Grade: B-

Anton Lander - The rookie centre was finally sent down to Oklahoma City after playing fourth line minutes all year long. In my mind, the fact that the young Swede has been up here all season was a mistake. That being said, playing major minutes in the AHL with his good friend Magnus Paajarvi, should do him a world of good. As will an extended playoff run down in OKC.
Grade:C

Ryan Nugent-Hopkins -After returning early in the month from his shoulder injury, the rookie centre lasted only a game and half before re-injuring the same shoulder. The Nuge got back into the lineup for the final three games of the month and promptly picked up points in each game. Despite a bit of bad luck on the injury front, if Nugent-Hopkins remains healthy the rest of the way, he should be the first Edmonton Oiler to win the Calder Trophy in the franchises history.
Needs To Work On:  Staying healthy and continue to build on his chemistry with Jordan Eberle. The two were a perfect fit from Day One and look to have the makings of a very special tandem moving forward.
Grade: A

Magnus Paajarvi -  After being recalled from Oklahoma City for the second time this season, Magnus finally was given a chance to play in a top six role and after a couple of games, he began to flourish. Playing on a line with Horcoff and Hemsky, Paajarvi scored not only his first goal of the season but picked up his second. He scored four points in his eight games before being sent down to Oklahoma City to help the Barons, with what they are hoping will be a lengthy playoff run.
Grade:C-

Lennart Petrell - The hard working winger continued doing his thing on the penalty kill and bringing a physical edge on a nightly basis. The twenty-seven year old rookie was rewarded for his efforts with his first two point game against the Jets on Trade Deadline day.
Needs To Work On: Absolutely nothing. If Petrell continues to play the way he has for much of the season, one would have to think the Oilers will have a spot for the feisty Finn come 2012-2013.
Grade:B

Ryan Smyth - This generation's Mr.Oiler has been downright awful since December and has simply ran out of gas. Smyth's start to the season was so good, that his stats at the end of the year won't look to shabby but anyone who has watched this team with any sort of regularity, is well aware of how his season has gone for #94.
Needs To Work On: A big reason as to why Ryan was brought back into the fold, was to help teach the young kids what it means "to be an Oiler". His poor on ice performance has made his tendency to regularly glide off the ice on line changes and take countless offensive zone penalties, stand out even more. Not exactly the way you would want one of your core leaders to be carrying himself around the youngsters.
Grade:B-

Tom Renney has one of the toughest coaching jobs in the NHL. He has a team that isn't good enough for prime time but he has a fan base that is tired of watching their team continually lose, despite adding some great young players into the fold. While this team has it's limitations in certain areas, the plan coming into this year was not to have another lottery pick...at least that was the bag of goods this organization was selling their fans. For all the frustration this season has brought, the development of the three kinds and the Oilers special teams has been a great thing. When you consider how bad this team's power play has been in recent years, the fact that they have the best power play in the league is simply staggering. Add to that, a middle of the pack penalty kill and you can see that the coaching staff has done some good things this season. Much of their struggles revolve around a lack of depth and injuries but under performing players have also played a role. The big issue remains the lack of accountability for veteran players who are playing poorly and a reluctance to try and give some of the kids a little more responsibility.I understand they want to protect the kids to a point but I think the time has come to loosen the reigns.

Need To Work On: Working as many players into situations they may be asked to fill in the very near future. That not only means continuing to put more on to the plates of players like Taylor Hall, Jordan Eberle and Ryan Nugent-Hopkins but also giving a guy like Linus Omark a legitimate shot at proving he can play in a top six role. See what these guys can do and make some decisions on where to go moving forward. It is all about opportunity and the time has come to see if some of these youngsters are ready to do some heavy lifting.