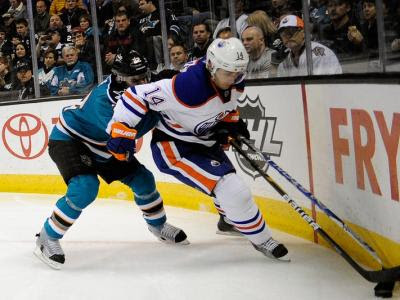 The Edmonton Oilers were playing their second game in as many nights and coming off a disappointing loss in Anaheim but still found a way to beat the struggling San Jose Sharks by a score of 3-2 in a shootout. Sam Gagner scored the shootout winner and Jordan Eberle became the first Edmonton Oiler to score thirty goals in a season, since Dustin Penner turned the trick back in 2009-2010. The game also marked the return of winger Linus Omark to the Oilers lineup and in a curious move, Edmonton decided to use the talented Swede in a limited role on the club's fourth line.

Edmonton got off to quick start, when Eberle scored a beauty just ten seconds in, to put San Jose behind the eight ball early on. After winning the opening faceoff, defenceman Ryan Whitney dumped the puck into the Sharks zone and the puck bounced awkwardly in front of Dan Boyle and directly to the Oilers young forward. As Eberle collected the loose puck it popped up into the air and the sniper knocked it out of mid-air and past a startled Annti Niemi. The goal was the thirtieth of the season for the talented sophomore and moved him into a tie for eighth place among the league's leading goal scorers.

San Jose would get that one back just over three minutes later, courtesy of the first goal of the season from a former Edmonton Oiler. Defenceman Jim Vandermeer would blast a point shot past netminder Devan Dubnyk, that frankly has to be stopped. While the former Edmonton rearguard unleashed a heavy shot, an  NHL netminder can't be beat from that distance on the glove side. Not exactly the start the twenty-five year old goalie was hoping for, after being pulled in his last start.

The Sharks would take their first lead of the night with less then five minutes remaining in the middle frame, again, thanks to another miscue from the Oiler goaltender. Dubnyk handled a San Jose dump in like a grenade and coughed up the puck at the side of his net to Logan Couture and the second year man quickly found the hard charging Ryan Clowe, who ripped his twelfth of  the season past Dubnyk and giving the Sharks a 2-1 advantage.

That lead did not last long, as Edmonton would respond less then a minute later. Jeff Petry's blast ricocheted off Ryan Smyth and past a helpless Niemi to square things up at two. The goal was the veteran wingers eighteenth of the year but only his third in his last twenty games. Defencman Ladislav Smid picked up an assist on the play giving the shutdown defender eleven points on the season, which matches his career high that he previously reached in 2008-2009.

Neither side could find that go ahead goal in the third but the Sharks came close. Devan Dubnyk made his best save of the night, robbing Patrick Marleau on a three-on-two break with less then four minutes remaining. That stop was huge and helped off set the goalies two earlier blunders and sent this one into extra time. In what was a rather uninspiring overtime session, both sides seemed very comfortable with taking this one to the shootout.

After Dubnyk stopped both Pavelski and Michal Handzus on the Sharks first two attempts, all the pressure swung onto Niemi's the shoulders. The Sharks goalie had the good fortune of having Eberle hit the post on the Oilers first attempt but he would not be so lucky on their second, as Sam Gagner beat the netminder with a quick shot to the glove side to give Edmonton the lead. That left it up to defenceman Brent Burns to extend the skills competition but he was unable to beat Dubnyk after losing control of the puck, just before his attempt.

In what many felt to be a confusing move, Edmonton decided to use Linus Omark in a fourth line role with Lennart Petrell and Eric Belanger. Despite having the fewest number of shifts of any player, Omark was among the team leaders with three shots and looked to be working hard in all three zones. Personally, I don't see the point in bringing a player like Linus up to play ten minutes on the fourth line but perhaps they are just working him back into the fold slowly, after playing three games in three nights over the weekend in Oklahoma City. With the Oilers not scheduled to play again until Thursday night against the Montreal Candiens, I would be stunned and rather disappointed if the diminutive winger did not find himself on one of the top two lines against a very passive Montreal side. The Habs are not an overly physical bunch and would seem to be a perfect opponent for Omark to get a chance to prove what he can do.
Posted by Oil Drop at 6:31:00 am