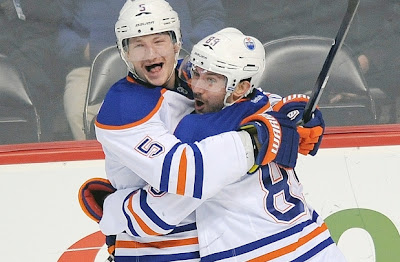 With the month of February now in the books, it's time to look back at the month that was and dish out my monthly report card. Each players rating will be based on their performance from opening night up to and including the teams last game on February 29th. This column will focus on the blueline and netminders, while later today, the focus shifts to the forwards and coaching staff.

Devan Dubnyk - Devan carried the mail for the Oilers last month, going 5-5 with a 3.18 GAA and a .897 SV% in his ten appearances. While he was spectacular at times, he was equally as unimpressive on other occasions. The question remains the same about Dubnyk, is he a legitimate NHL starter?
Needs To Work On: Dubnyk has allowed weak goals all year long and that trend doesn't seem like it will come to an end anytime soon. Dealing with a bad goal against is hard enough but when you consistently allow them at the worst possible moment, it usually is too much for most teams to rebound from.
Grade: B-

Nikolai Khabibulin - For the first time this season, Nik took a back seat to Devan Dubnyk as the clubs starting netminder and also suffered his first injury of the season. The veteran goalie appeared in just four games, going 1-1-1 with a 3.90 GAA and a .887 SV%. He was outstanding against Ottawa in the game he won but was ok to poor, in his other three starts. The only way Dubnyk doesn't start two-thirds of the games down the stretch, is if the youngster falters.
Needs To Work On: As the season has progressed, Khabibulin has had the same issues his partner has had all season. His play game to game has become far to inconsistent over the past three months and the soft goals have started to find their way through the Bulin Wall, with much greater frequency.
Grade: B

Cam Barker - While Barker's play early in the season wasn't overly flashy, his abilities to move the puck were missed after he suffered an ankle in in mid November. He made his return in Sam Gagner's big night against Chicago and chipped in with a goal and a +3 rating. Since then, he has played eight games going -7 and looks like the worst D man on the club. His play has been so poor, that he hasn't been able to stay in the lineup and it could very well cost him a chance at an NHL job next season.
Needs To Work On: Cam's decision making and lack of foot speed are frankly alarming. He needs to pick up the intensity level when he plays because as it stands, he looks disinterested and his results have been disastrous. The combination of poor decision making with a lack of urgency is never a good thing for an NHL defenceman.
Grade: F

Tom Gilbert - It was a pretty tough month for Gilbert. After being the teams best defenceman over the first three months of the season, Tom was sidelined until early February and struggled mightily in his return. His poor play coupled with the improvement in Jeff Petry's game, made the veteran expendable. The decision to move Gilbert in a one for one swap for Nick Schultz, shows that the organization has recognized the teams need for a better mix and Gilbert became the first causality.
Grade: B-

Theo Peckham - There were two reasons why Theo did not see action in a single game last month, injury and numbers. He was sidelined with a sinus injury for the first part of the month but hasn't seen the ice since. Part of the issue was the club wanted to see what Cam Barker could do once healthy. When Peckham does get back into the lineup, it is a must for him to leave a lasting impression heading into next season or his future could very well be in another organization.
Needs To Work On: If he keeps his game simple and plays with an edge, Theo will get his minutes. He doesn't need to be a hero out there, he just needs to be a dependable bottom pairing guy and that is a situation that a player like him should excel at.
Grade: C-

Jeff Petry - After improving his play over the previous two months, Petry took yet another step in his development in the month of February. Jeff is now part of the Oilers top pairing with Ladislav Smid and he continues to take strides in his game on a nightly basis. Petry routinely leads all D men in ice time and has started to add a physical dimension to his game.
Needs To Work On: Continue to limit turnovers. While he was a give away machine early in the season, he has cut them down drastically. That being said, he still has room for improvement but has the makings of being a solid top four guy...if not a top pairing defenceman down the road.
Grade: B+

Corey Potter - The first year Oiler continued with his inconsistent play and has struggled for months. It is clear that Potter's hot start to the season was nothing more then a smoke and mirrors routine but he still has a place as a power play specialist and a bottom pairing guy on this team.
Needs To Work On: Corey needs to stay under control in the defensive zone and keep from running around in his own end. Far too often, he is pulled out of position by pursuing the puck, instead of playing  within the Oilers system. I've lost count of how many times he goes behind the net when his partner is already there and leaves the slot wide open. While he is not the only blueliner with this problem, he is the worst of the bunch. Moving forward, less pressure and responsibility on Potter is the way to go.
Grade:C

Nick Schultz - The newest Oiler made his debut in the final game of the month and picked up his first point and displayed the type of play fans can expect from the ten year vet. While not overly physical , Schultz is positionally solid in his own end and has the ability to rub out opponents along the boards. Moving forward, look for Nick to become a big part of  Edmonton's penalty kill and to be used regularly in a shut down role.
Grade: N/A


Ladislav Smid - When you look at Smid's stats, nothing jumps out at you but anyone that watches Edmonton play on a regular basis, will tell you how good the Czech defender has been. From Day One, Ladislav has shown he is willing to do whatever is necessary for this team to succeed. Smid recently moved back into second place in the league for blocked shots and is one of the few players that leads their club in both blocked shots and hits.
Needs To Improve On: Smid still needs to stop trying to block every shot, as he either ends up screening his netminder or pulls himself out of position. Outside of that, not much fault can be found in the now veteran defenders game.
Grade: A

Andy Sutton - Sutton continued doing what he does. For the most part, he keeps things simple but he will occasionally be made to look foolish, as Todd Bertuzzi did earlier in the month, by a player with decent foot spped. With the Oilers defence as healthy as it has been all season, the big man is finally being used in the 5/6 role and looks far more comfortable because of it.
Needs To Improve On: With Edmonton deciding to sign the veteran blueliner to a contract extension before the trade deadline, his role essentially remains the same. He is nothing more then a depth guy but his biggest impact should be in the dressing room and off the ice, helping the youngsters develop as players.
Grade: B-

Ryan Whitney - For the first time since last season, Ryan finally started to resemble the defenceman that roamed the Oilers blueline in previous seasons. He picked up eight of his twelve points on the season in February and has been pain free for the first time in ages. The addition of a healthy Whitney into the lineup makes a huge difference and if he is still capable of reaching the level of play he displayed during the 2011-2012 season, Edmonton will have their top flight D man.

Needs To Improve On: Even at his peak, Whitney struggled with quick players attacking him one-on-one and it remains a concern. Having said that, if they can add his puck moving and decision making abilities back into the fold, on a full time basis, they will be more then happy to live with his few shortcomings.
Grade: B-
Posted by Oil Drop at 2:59:00 pm