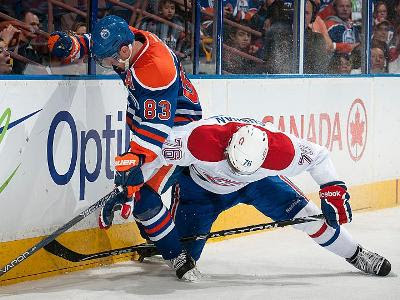 In what was a battle between two of the leagues cellar dwellers, the Montreal Canadiens came into Rexall Place and out hustled the Edmonton Oilers in earning a much deserved 5-3 victory. Defenecman P.K. Subban was dominant in all facets of the game and led the way with a three point night, while forward Max Pacioretty reached the thirty goal plateau with a two goal effort. Oilers forward Linus Omark picked up his first of the year in the losing effort.

Edmonton would open the scoring on the power play, courtesy of an undisciplined roughing minor from Subban just past the midway point of the first period. Corey Potter's point shot was redirected by Shawn Horcoff past Montreal netminder Peter Budaj to make it 1-0 just past the twelve minute mark.

Late in the third period, defenceman Theo Peckham took his first of three penalties on the night and it didn't take the Canadiens long to make the blueliner pay for his miscue. Only six seconds after Peckham took a seat in the penalty box, Theo was back on his feet and heading to the Oilers bench with the game even at one. Subban ripped at absolute bomb right off the draw past Edmonton starter Nikolai Khabibulin with just seventeen seconds left in the opening stanza.

Montreal came out hard to start the second and were rewarded with the go ahead goal just past the two minute mark. The much maligned Scott Gomez made a nice play with a quick wraparound move that was stopped by the veteran Russian netminder but an unmarked Max Pacioretty poked the loose puck past the helpless puck stopper.

Just under five minutes later, Linus Omark would notch his first of the year on a harmless looking wrist shot, that somehow found its way past Budaj to knot the proceedings at two. Linus found himself in a top six role for the first time this season and did not look out of place playing alongside Sam Gagner and Ales Hemsky, both five-on-five and on the power play. No one questions the talented Swede's skill level but there seems to be concern within the organization, if the diminutive winger can compete in all areas of the ice. If last night was any indication, Omark looks as though he will do everything in his power to make the Oilers decision on what to do with Linus moving forward a difficult one.

Late in the period it appeared as though former Calgary Flame and Oiler killer Rene Bourque, had put the visitors ahead, on another crease crashing play from the Canadiens. However, the supposed go ahead marker was reviewed and correctly disallowed, as the puck clearly did not completely cross the goal line. Edmonton caught a break but moments later, Peckham took another minor to put the Habs back on the man advantage but luckily, the Oilers were able to kill it off and get to the intermission with the game tied at two.

One would think that the rugged rearguard would have got the message after penalty number two that he needed to be better but that obviously wasn't the case. Just past the two minute mark, Theo would pick up penalty number three on the night and for the second time it would prove costly. While it took them only six seconds to score on their first man advantage, this time Edmonton managed to hold them off for all of forty seconds. With the Canadiens crashing the net and the puck pin balling around, Ryan Smyth lost his man in Tomas Kaberle and the veteran blueliner managed to work his way down to the side of the Oiler goal and slipped is third of the season past Khabibulin to restore their one goal lead.

Two minutes later, the Habs would make it a two goal lead thanks to a lucky bounce and smart play by Lars Eller. After stopping Ryan White's initial shot on yet another odd man rush, Khabibulin was slow to get back to his post and Eller fired the puck off the Oiler netminder and into the net for his fifteenth of the season. Not surprisingly, Rexall place erupted as nearly half the crowd was decked out in their Montreal Canadien garb.

Taylor Hall would bring the Oilers to within one, when he zipped his twenty-fourth of the season past the Montreal tender with just under seven minutes to go but Edmonton could not find the equalizer. Subban would cap his great night by finding Pacioretty for an empty net goal with seventeen second to play, giving the Montreal power forward thirty goals on the season.
Posted by Oil Drop at 10:32:00 am