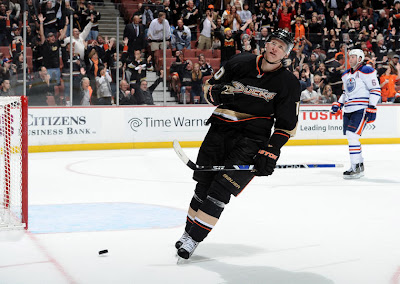 The Edmonton Oilers decided to take the day off on Saturday to get in some team bonding, courtesy of owner Daryl Katz. Unfortunately, the Oilers were M.I.A. to start last night's game and it cost them in the end, dropping a 4-2 decision to the Anaheim Ducks. Corey Perry led the way for the surging Ducks, with two third period goals and veteran winger Teemu Selanne picked up his 1,398 career point, which moved him into a tie with his boyhood idol and Oilers legend Jari Kurri, for top spot among Finnish born players to have ever played in the NHL..

While neither side came out flying from the opening faceoff, Edmonton was far worse and if not for a couple of goal posts and some timely saves from Nikolai Khabibulin, this one could have been over early. After the slow start, the Ducks started to come in waves and Edmonton was simply over matched. The Oiler netminder made a number of big saves, including a big stop off Ryan Getzlaf on the lip of the crease. Both Selanne and Bobby Ryan beat the Russian goaltender cleanly with a couple of bullets but they could only catch iron.

With the Oilers on the verge of killing of a penalty late in the first period, Ryan Smyth decided to half-heartedly clear the puck up the middle of the rink and as it barely reached the centre line, for some unknown reason, all four penalty killers decided to, inexplicably, glide off the ice on a line change. Not surprisingly, one quick pass from Cam Flower sent in Ryan and Jason Blake in on a two-on-none break, with not a single Oiler jersey in sight. Even though he was left to fend for himself, Khabibulin made a great stop off Blake but in a cruel twist of fate, the rebound would carom in off defenceman Corey Potter and past the fallen netminder.

Apparently the riot act was read in between periods, as Edmonton came out flying from shift number one and didn't stop. They out shot Anaheim 22-8 during the middle stanza but were unable to beat Jonas Hiller until the final minute of the second. After making a number of crucial stops, the best of the bunch was off Jordan Eberle, the Swiss netminder was finally beat on a perfect deflection from Shawn Horcoff to even things at one. The Oilers captain neatly redirected a lovely slap pass from defenceman Nick Schultz, for his twelfth of the season. The game was there for the taking but Edmonton would self destruct in the final frame, just as they have on so many nights this season.

The visitors would get the first great chance of the period, when Eberle was sent in all alone courtesy of beautiful pass from Ryan Whitney but Hiller was up to the task and stopped Mr.Automatic on the breakaway.  That save would turn out to be huge, as the home side would regain the late just under five minutes later.

With the Oilers deep in the Anaheim zone, the Ducks would force a turnover along the side boards and defenceman Corey Potter decided to pinch and that decision would prove costly. With Whitney also up ice on the play, Potter picked the wrong time to step in and Selanne found Ryan with a beautiful stretch pass, and the talented winger broke in all alone and beat the Oiler netminder with  a nice backhand move and put the Ducks big in front.

As mentioned earlier, the point moved Selanne into a tie with Kurri, for nineteenth place on the NHL's all time scoring list and first among Finnish players. Teemu is one of the classiest guys in the league and when asked after the game about the milestone, the now forty-one year old sniper had nothing but kind words to say about one of the all-time greats in Edmonton's storied history.

"Jari was my idol when I was growing up," he said. "His picture was on my wall and everything. I learned a lot of different things from that and off the ice from him. Later, we became very good friends. It’s very special. Obviously I would never imagine I would have as many points as Jari Kurri."

The Ducks would extend their lead to two, when Whitney made a terrible bank pass off the end boards to open space and no one in particular and Niklas Hagman was more then happy to collect the loose puck. The veteran Finn quickly found a wide open Corey Potter with a cross ice feed and last year's Hart Trophy winner, made no mistake in scoring his thirty-second of the season.

The Oilers would cut the lead back to one, when they were given their first power play opportunity in almost three full games and it took the NHL's top ranked power play just over a minute to connect. Ryan Nugent-Hopkins found Jordan Eberle with a gorgeous cross ice pass that was quickly deposited past Hiller for the young Oiler sniper's twenty-ninth goal of the year. There was under two minutes to go and Edmonton still had a chance to force this one to extra time.

Unfortunately, another turnover from Whitney at the Anaheim blueline sealed this one. Ryan's attempt to get the puck into the the Ducks end was knocked down by Perry and the talented winger would find the open net for his second of the period and put an end to Edmonton's comeback attempt.
Posted by Oil Drop at 4:17:00 am