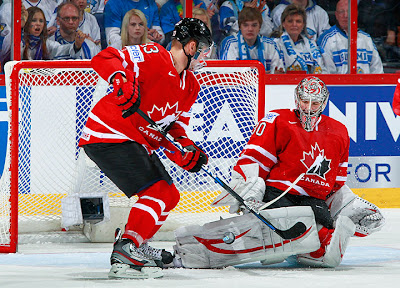 Finland came out flying and dominated the opening period of play, building a 2-0 lead. They held a huge 15-4 shot advantage after the first and were by far the better team. That being said, the Canadians have struggled out of the gate in every game, outside of their cake walk against France and they would find themselves behind the eight ball again, after conceding the first goal of the game before the contest was six minutes old.

Recent addition Kyle Quincey recklessly turned over the puck in the neutral zone, giving the Finns a two-one-break from the blueline in. Niko Kapanen sent in Antti Pihlstrom with a quick pass and Pihlstrom skated in and easily beat Cam Ward with a rather ordinary backhand, that the netminder completely misjudged. Ward had struggled in all three of his previous starts in the opening minutes and it was much of the same on this night.

Less then five minutes later, the home side would double their lead on the power play after a undisciplined penalty from defenceman Dion Phaneuf. With Canada already a man down thanks to Quincey cross-checking minor, the Toronto Maple Leafs captain took a retaliatory slashing penalty that he simply can not take. While these types of infractions are generally ignored during the NHL playoffs, that isn't the case now and it never has been, at any of the previous World Championships.

While Finland did not score on the brief two man advantage, they kept the pressure on and Mikko Koivu ripped a shot past Ward, with all of twenty-six seconds gone in the Phaneuf minor. The Hartwall Arena crowd exploded into a frenzy and Team Canada head coach Brent Sutter decided to call a timeout to settle his troops.  The ice remained tilted for the rest of the period but Ward managed to keep the deficit at two and give his teammates a chance to recover and try and rebound from a rough opening twenty minutes.

Canada would get on the board just past the five minute mark of the second, as Burrows celebrated his return to the lineup with his first of the tournament. The Canucks winger was allowed to skate out from behind the Finland net, leaving Kari Lehtonen at his mercy. The first time Team Canada did not waste his opportunity, beating the Dallas Stars netminder low to the stick side and cut the lead in half.

The Finns would bounce back quickly and restore their two goal, once again, on the man advantage. Jussi Jokinen wired a bullet over his Carolina Hurricanes teammate, exactly one minute into Jeff Skinner's elbowing penalty, to make it a 3-1  At this point, it looked as though not matter what Canada tried, the bounces were not going their way...or so it seemed.

First, John Tavares would light the lamp with under six minutes to go in the middle frame, as he deposited Skinner's feed on a two-on-one break, that Lehtonen had no hope in stopping. Less then four minutes later, Skinner would tie it up with a beautiful individual effort that brought the Team Canada bench to their feet. After picking up Ryan Nugent-Hopkins errant pass just inside the Finnish blueline, the former Calder Trophy winner drove to the goal and froze the big puck stopper with a super move, before slipping a slick little wraparound by Lehtonen's outstretched pad. Just like that, the game was all even and the momentum appeared to be with Team Canada heading into period three.

After exchanging early chances in the final frame, Canada would take their first lead of the game when Corey Perry placed the puck on a tee for a hard charging Evander Kane, who snapped a shot through Lehtonen and into the back of the Finland net. The much maligned duo of Perry and Ryan Getzlaf have started to pick it up of late and the pair were a force in the third period. The addition of Kane to the unit, has clearly added a spark and has jump started the two Anaheim Duck forwards.

Ward held the fort the rest of the way making a number of big saves but none better then his beautiful pad stack stop off forward Leo Komarov in the dying seconds of another Finland power play.

Edmonton Oilers forward Jordan Eberle would close out the scoring with his fourth of the championships, into an empty net, with twenty-four seconds to go to seal the deal. The goal moved Eberle in a tie for second place among goal scoring leaders, with his Edmonton teammate Ales Hemsky. Pittsburgh Penguins centre Evgeni Malkin currently leads the way with six goals, which includes his hat-trick performance in Russia's impressive 7-3 come from behind victory against Sweden on Friday night.
Posted by Oil Drop at 11:39:00 pm