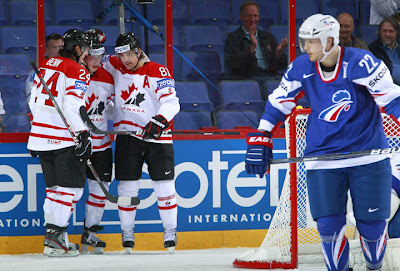 It didn't take long for the "new line" to hit the score sheet, as Nugent-Hopkins buried a feed from Sharp at the 1:59 mark. Canada would make it a two goal bulge, when the Nuge returned the favour by setting up Sharp for a power play marker midway through the first. Benn would not be outdone, by potting two of his own, in just under three and a half minutes. While one can't make too much out of the dismantling of an inferior French side, it was an impressive way for the trio to kick things off.

Brian Henderson would put France on the board, capitalizing on a Canadian  turnover in the final minute of period one, beating Dubnyk with a quick shot and making it 4-1 game heading into the first intermission. That would be as close as the French would get, as Canada continued to pour it on over the final forty minutes, even though the two sides would exchange goals in the middle stanza.

Jordan Eberle would score his second of the tournament, flipping a loose puck past netminder Fabrice Lhenry, with Canada on the man advantage, at the 13:19 mark. That restored Canada's four goal lead but it would be short lived. Dubnyk made an ill advised clearance attempt up the middle of the ice, only seconds after Eberle's goal, that would find its way behind the Edmonton Oilers goaltender just thirty seconds later.

Canada would close out the scoring in the third with two more, Nugent-Hopkins second of the game and Corey Perry's first of the tourney. Patrick Sharp ended up tying a Team Canada record of five points in a game, with his one goal/four assist performance. While both Benn and RNH ended up with a pair of goals and a helper each.

For the first time in this year's World Championships, Canada managed to play a full game without losing a roster player to injury for. The game also marked the debut of Detroit Red Wings defenceman Kyle Quincey, who was added to the roster on the weekend to replace injured Montreal Canadiens defenceman P.K.Subban.
Posted by Oil Drop at 10:40:00 pm