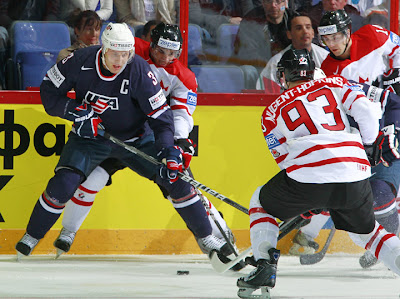 It didn't take long for this one to start going sideways on team Canada, as Winnipeg Jets centre Jim Slater opened the scoring just over a minute in, on a shot that Cam Ward wold love to have back. The Carolina Hurricane puck stopper was not set to deal with Slater's quick release and was easily beaten to put Canada down early. Not exactly the start Ward was looking for, after a rather shaky outing against Slovakia in Fridays' opener.

To his credit, the Canadian goaltender bounced back from the tough start, making a number of big stops throughout the opening frame. The Americans were buzzing all period long and if not for Ward's stellar play, this one would have been over after twenty. While his teammates struggled to amount any sort of a  sustained attack on netminder Jimmy Howard, they did mange to get their goalie back on level terms.

After gaining possession in the USA zone, the puck worked its way back to Keith at the left point, who set up a wide open Tavares, with a splendid slap pass. The Islanders leading scorer made no mistake, slipping a backhand past a down and out Howard, to square things up at one.

Despite carrying the play throughout the first period and early in period two, Team USA were unable to get another puck past Ward, who seemed to have suddenly found his game. His diving stick save of Kyle Okposo, with only seconds remaining in period one, was definitely the highlight of the opening stanza.

Just past the seven minute mark of the second period, Canada would somehow find themselves with the lead. Defenceman Jay Bouwmeester hit Tavares with a gorgeous stretch pass from behind the Team Canada goal, that the talented centre neatly dropped to linemate Jeff Skinner. The Hurricanes sniper converted the two-on-one opportunity by whistling a snapshot past a helpless Howard to make it 2-1 for Canada.

Jack Johnson would get that one back with his first of the night on the power play, on another shot that Ward would probably like to have another shot at. After turning away chance after chance from, Johnson's blast somehow managed to get past the netminder, despite being in seemingly perfect position to make the stop. After forty minutes of play, the Americans had far more chances then their Canadian counterparts but still found themselves in tie game, even with a 32-19 advantage on the shot clock.

With Canada on the power play early in the third period, Edmonton Oiler rookie Ryan Nugent-Hopkins turned over the puck at the USA blueline to Patrick Dwyer, after attempting a cheeky little drop pass. The Americans pushed the play up ice on an odd man rush but Canada hustled back to break up the play...or so it seemed. After gaining possession back behind their net, they coughed it back up and the puck bounced ricocheted back to Dwyer, who quickly slipped a wrap around past his Carolina teammate. Captain Ryan Getzlaf had rubbed Dwyer out of the play behind the goal but decided to just let him go and then stood by and watched, as he poked the puck home to put Team USA back in front.

Getzlaf was dreadful all night long and looked to be doing nothing more then going through the motions from the drop of the opening puck...not exactly the type of performance you want to see from your recently named captain. His indifference seemed to bring down the level of compete in both Corey Perry and Jamie Benn. Making their supposed "top line" a non-factor.

After Evander Kane evened things up near the midway point of the period, on wrist shot that Howard should've stopped, Nate Thompson would put the USA in front with under four minutes to go in regulation. Canada could not handle the persistent forecheck from the bottom six grinders and got caught running around in their own end, after turning the puck over. Thompson was left all alone in front of the Team Canada goal and his quick little shot, squeaked through Ward's pads and barely trickled over the goal line.

It looked as though the Americans were about to pull off the upset, when a broken play gave Canada life with less then two minutes to go. After an ill timed Bobby Ryan drop pass near his own goal, the puck found its way back to the point after a simple puck battle and luckily for Canada, it came right to the hard charging Keith, who a wired a bullet past Howard to make it 4-4.

With the teams headed for overtime, Tavares would take a hard luck penalty with two seconds left in regulation, after clearing the puck out of mid-air over the glass. The unfortunate delay of game penalty would prove rather costly, as Johnson would blast his second power play goal of the game past a screened Ward, giving Team USA their first win over Canada in their last seven tries.

Before the game, Team Canada added Detroit Red Wings defenceman Kyle Quincey to their roster, replacing injured blueliner P.K. Subban.With Marc Methot making his debut against team USA after missing the opener with a sore groin, it  looked as though Canada were set moving forward. Unfortunately, the injuries just keeping on coming. Already without Canucks winger Alex Burrows, who suffered a concussion against Slovakia, they have now lost the services of San Jose Sharks defenceman Marc-Edouard Vlasic for the remainder of the tournament, with a leg injury.

Canada's next action will be on Monday morning, as they take on France in what should be nothing more then a formality. Look for Edmonton Oilers netminder Devan Dubnyk to get the call in goal, in what will be his first action of the tournament. Dubnyk looked to be nothing more then Cam Ward's caddy heading into the World Championships but Ward's inconsistent play has given Dubnyk a real chance at possibly wrestling away the starters job. While his performance against the French will not determine his ultimate fate, if he plays well when he sees the net and Ward continues to let in weak goals during round robin games, the decision will not be a difficult one, for Brent Sutter and his coaching staff, when it comes to the elimination rounds.
Posted by Oil Drop at 11:37:00 am