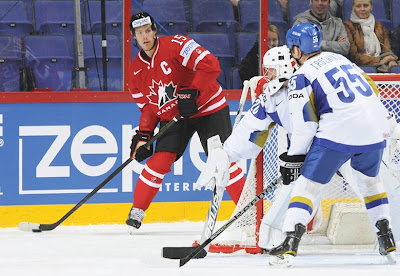 While the score line should come as no surprise to anyone, Kazakhstan did well to stay in this one as long as they did. Dion Phaneuf scored his first of two, blasting a power play marker past Vitali Kolesnik at the 15:45 of the first period but that would be the lone goal of the opening frame.

Canada would extend the lead just past the midway point of the second, when Corey Perry was allowed to skate in from the Kazakhstan blueline and take the puck around the net, before tucking in a quick wraparound home.

They would make it a three goal bulge before the period was out, when Alex Burrows scored his second in as many games. With the two sides playing four-on-four, Jordan Eberle was nailed at centre ice by Vladislav Koelsnikov as he stepped out of the penalty box, but Eberle still managed to tip the puck forward to Burrows before falling to the ice. The young Oilers forward quickly jumped to his feet and was the first one to congratulate the Vancouver Canucks winger on his shorthanded breakaway effort.

Kazakhstan had done well to keep it respectable through forty but that was about to change...and in a hurry. Canada would score four times in just under three minutes and balloon a three goal lead into a seven goal cushion. Evander Kane would get this scoring started, notching his third of the tournament 2:57 into period number three. Forty-two seconds later, John Tavares put away a nice feed from Eberle, for his fourth of the preliminary round to make it 5-0.

Eight seconds after the Tavares lit the lamp, Teddy Purcell would make it a six goal difference and mercifully chase Kolesnik from the Kazakhstan net. However, the change did little to slow Canada down, as Phaneuf would score his second of the game, less then two minutes after swapping goalies.

Ryan Nugent-Hopkins would close out the scoring, with his third of the tournament late in the period to make the final 8-0. Canada would be forced to kill off a couple of late Kazakhstan power play opportunities but still managed to secure the shutout for Dubnyk. The Oilers starting netminder now sports a 2-0 mark for the tournament but has had to face little in the way of quality chances, against far lesser competition.