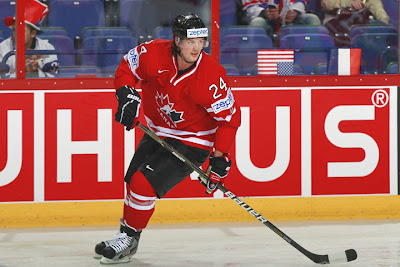 Outside of the Jeff Skinner-John Tavares-Patrick Sharp line, Team Canada's top three lines have shown little to no jump. Having already lost winger Alex Burrows to injury during their opening match against Slovakia, the time has come for Sutter to shake things up. While leaving the Tavares line together is a no brainer, there is also no reason to touch the fourth line. The trio of Ryan O'Reilly, Andrew Ladd and Teddy Purcell may not produce every shift out, they are what they are. They are players that are best suited in a bottom six role, in this sort of setting and hence no need for a change. That leaves the Ryan Nugent Hopkins and Getzlaf lines to make some sort of swap and find a spark.

After Burrows was knocked out of action, the coaching staff decided to put Winnipeg's Evander Kane, with the Edmonton Oilers duo of Nugent-Hopkins and Jordan Eberle. While the three youngsters have shown some flashes of brilliance, they have been inconsistent at best. Add to that the aforementioned struggles of the Perry-Getzlaf-Benn combination and the necessary move seems rather obvious.

Adding the speed and energy of a player like Kane, to the Ducks duo should hopefully jump start their games. If nothing else, the move should serve as a wake up call for the two veterans. They need to realize that they have to be much better...and quickly. As far as Benn goes, he seems to be the perfect player to slide in and play with the two gifted Oiler forwards.

Since coming into the NHL, the area that has been most challenging for Edmonton's talented core has been dealing with the physical side of the game. While they have shown the willingness to try and take care of themselves on the ice, that has not always been the most successful route. The lack of a big bodied linemate was an an issue on more then one occasion with the Oilers. Initially the thought of using Burrows made some sense. While the Canucks winger is far from a "big body" he plays a feisty style and has proven to be able to not only protect himself but keep opponents honest, if they were to decide to take runs at his linemates(aka the Sedins). Adding Kane onto the line, made the trio far more explosive offensively but left them far too easy for opponents to play against.

By slotting Benn in with Eberle and Nugent-Hopkins, they would not only get instant protection with the presence of the 6' 2" third year player but it would also give them a bona fide triggerman to play with. When you add the physical edge the Stars forward brings to the table, along with his skating ability, it does seem to be a natural fit.

Whatever the reason may be for Team Canada's struggles out of the gate, they need to be addressed and quickly. In such a format, it is essential for all teams to find that chemistry early on and build on it from there. If players are not gelling, you must adapt and try something else. There is so little room for error, that waiting to long to make the switch could prove rather costly.
Posted by Oil Drop at 6:00:00 am