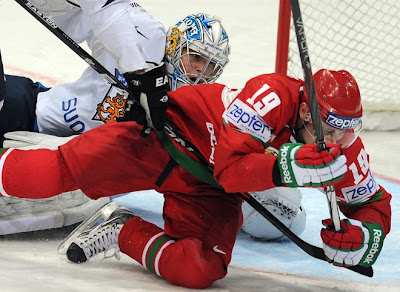 While the twenty-eight year old has battled the injury bug throughout much his seven year career, his first two seasons in Dallas have placed him among the top goalies in the league. During the 2011-2012 NHL campaign, Lehtonen was top five in both GAA (2.33) and SV% (.922), among starters who appeared in at least fifty games.That puts him right along such names as Pekka Rinne, Jonathan Quick, Henrik Lundqvist and the surprising Mike Smith. Clearly, the young Canadian squad will have their hands full trying to sneak a few pucks past the big Finnish puck stopper.

Add to that, the uneven play that Cam Ward and Devan Dubnyk have delivered through the first four games and Canada will have little room for error. Finland will unquestionably have the crowd in Helsinki fully behind them and Canada will need to get a quality start from their netminder.

With Ward likely getting the call in between the pipes for Canada, the Carolina Hurricanes starter will have to match Lehtonen save for save and give his highly skilled but inexperienced teammates, the performance they are expecting from the former Conn Smythe Trophy and Stanley Cup winner. He simply cannot allow the early goal against, that he has in all three of his previous starts. Falling behind early against Finland, could prove disastrous for a Canadian side that is in a must win situation...if they have any intentions of finishing atop Group H.
Posted by Oil Drop at 10:19:00 am