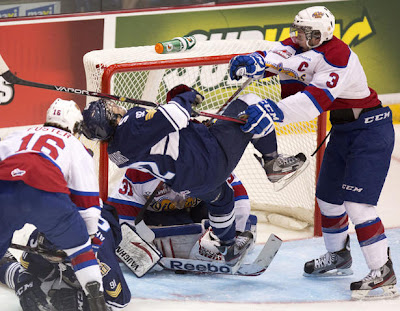 That being said, the first game of the Memorial Cup had its fair share of drama but Edmonton managed to hold on to a hard fought 4-3 victory, despite a less then stellar performance from the on ice officiating crew and the video goal judge. Third period goals from defencemen Griffin Reinhart and Martin Gernat gave the Oil Kings a much needed boost but it was a late goal off the stick of Henrik Samuelsson, that would be the difference. Netminder Laurent Brossoit continued his strong play for the WHL Champions, stopping thirty of the thirty-three shots Shawinigan fired his way, which allowed Edmonton to draw first blood in the round robin format.

The homeside came out flying and had Edmonton pinned in their end for opening couple of minutes. Despite their constant forecheck and intent to hit anything that moved, it would be the Oil Kings who opened the scoring. Defenceman Justin Hache coughed up the puck to Michael St.Croix, just inside the Shawinigan blueline, and the Oil Kings leading scorer found a wide open Kristians Pelss,  for an easy tap in, to give Edmonton the lead just before the three minute mark.

The lead would not last long, as Michael Chaput would rip a bullet past Brossoit after the Edmonton puck stopper spilled an ugly rebound into the slot. The goal came with the Cataractes on the man advantage, after defencemen Keegan Lowe and Mark Pysyk took back to back minor penalties  In Pysyk's defence, all the rearguard did was flatten a Shawinigan forward who was hacking away at his goaltender after the whistle. In my mind there was penalty but the call was made and the Oil Kings were unable to kill it off.

There would be no more scoring until the third period but the visitors clearly looked like a team that were feeling the effects of having just won the WHL crown on Sunday night and hastily making their way across country for the start of the tournament. Nonetheless, Edmonton managed to come out for the final stanza with some life and were rewarded on the scoreboard.

Early in period three, highly touted prospect Griffin Reinhart picked up the puck deep in the Oil King zone and carried it into the Shawinigan zone, before unleashing a shot over the glove hand of Alex Dubeau and just inside the post. That was just the spark Edmonton was looking for and they started to take their game to another level.

Three minutes after taking their second lead of the night, the two sides were assessed coincidental minors that turned out to be a wonderful trade off for the Oil Kings. They hemmed the Cataractes in their own end for just under a minute and were rewarded with an insurance goal off the blade of Edmonton Oilers prospect Martin Gernat. What was a tight 1-1 game heading into the final stanza, suddenly turned into a two goal deficit for the tournament hosts. Things were looking up for the side from the west...or so it seemed.

Just under a minute later, the Cataractes benefited from an absolutely brutal call, that turned the entire momentum of the game. Forward Loik Poudrier drove wide towards the Oil Kings goal and got a shot off that the Edmonton netminder bobbled but manged to stop. As the referee blew the whistle to stop the play, Anton Zlobin came in and took a whack at Brossoit that led the puck to come loose and trickle over the goal line. The official clearly waved off the goal but the entire crew still decided to talk it over to get the call right and came to the conclusion that it was no goal. To ensure they had dotted all their "i's" and crossed all their "t's" they decided to go to the video booth to make it 100% clear...and that's when it all started to unravel.

Not only were the official and video judge on different plains, they both seemed terrified of making the right call. It was clear to anyone with two eyes, that follows the game of hockey, that it was not a goal. The referee blow his whistle well before the puck crossed the goal line. It should have just been a formality. Instead, once the guy in the video room said "the puck was over the goal line but we would go with your on ice call" the on ice official  blatantly lied and said he did not blow his whistle before the puck crossed the line. Then the two seemed confused and decided it was a good goal. To say it was one of the most bizarre exchanging I have ever witnessed between two officials in any sport, would be a massive understatement.

The Oil Kings were stunned with the call, while Shawinigan new they caught a huge break. They suddenly had another life that they frankly, did not deserve but they were not about to let this opportunity slip through their fingers. With the fans back in the game, they kept coming for the equalizer but were unable to beat Brossoit.

That is until, Keegan Lowe gaveaway the puck in front of the Edmonton net, that was quickly deposited by Chaput up and over the helpless Oil Kings netminder, for his second of the night. In Lowe's defence, the puck simply stuck to the ice and did not move as he attempted to skate out from behind his net. The ice was terrible all night long and that unfortunate play, along with the goal that was simply handed to Shawinigan, erased the Oil Kings two goal cushion. It almost seemed as though, they were destined to lose this game.

Fortunately for Edmonton, the hockey gods decided to take pity on them and handed them a gift wrapped turnover, to regain their lead all of twenty-three seconds after the hosts tied things up. Griffin Reinhart knocked down a weak clearing attempt at the Cataractes blueline and quickly moved the puck to Stephane Legault. The talented youngster wasted little time finding a wide open Henrik Samuelsson, who's one timer easily beat Dubeau and gave the Oil Kings the victory.

Edmonton will now have the next two days off to get some rest before playing back-to-back games on Monday and Tuesday evening. The will take on the heavily favoured Sea Dogs on Monday, before closing out their round robin schedule against the London Nights on Tuesday.
Posted by Oil Drop at 12:34:00 am