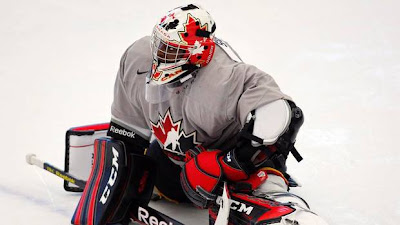 Today is Malcolm Subban's nineteenth birthday and while many seem to be focusing on his performance in Canada's 3-2 pre-tournament loss to Finland on Thursday morning, make no mistake, the birthday boy remains a key figure in just how far Team Canada will go at the 2013 World Junior Championships.

Head coach Steve Spott may want to paint the picture that he has yet to decide who his go-to-guy will be but let us hope that is nothing more than a smokescreen. This team will only go as far as the Belleville Bulls starting netminder will take them.

For a side has not had strong goaltending since Carey Price stood on his head in 2007, why does anyone really care how Subban performed in an exhibition game? Is this what things have come to?

While back-up Jordan Binnington is set to get the call against Sweden in Saturday's exhibition match, the notion that the Owen Sound puckstopper could possibly grab the inside track on the starting job, had better be nothing more than just talk.

There is no doubt, that Spott and his coaching staff have immense pressure on them heading into Ufa, Russia but they would be wise to not put any undue pressure onto their players...especially their goalies. There is no need to try and be the hero here. Subban has been their man for sometime...so why change it up now?

The fact this discussion is even taking place, is frankly embarrassing. Hockey Canada should know better and just name him the starter. Is there not already enough pressure on Canada's goaltending heading into this tournament.? The last thing this squad needs, is their number one guy questioning his game and whether or not his coach believes in him.

When exactly did allowing a pair of goals, on two separate 5-on-3's, fall squarely onto the shoulders of your goalie? Would the youngster have liked to have had the third Finnish goal back? Of course but isn't that the point of these games? Should the focus not be the fact Canada took eleven minor penalties and not their nineteen year old netminder?

Both goaltenders will likely see time during the early phase of the competition but if Malcolm Subban is not Canada's starting netminder against Germany on December 26th, they are asking for trouble. Hockey Canada has been handed a gift in the form of Edmonton Oilers star centre Ryan Nugent-Hopkins and for them to create unnecessary doubt about the one position many had question marks about coming into the World Junior Championships, seems almost unimaginable.

This team will go as far as the Boston Bruins first round selection will carry them and the sooner Steve Spott comes out and names him his starter, the less pressure the kid will feel coming out of the gate. Make no mistake, outside of Nugent-Hopkins, no other player will have more pressure on them to help deliver Canada a Gold Medal, than P.K. Subban's little brother.

Having said that, should Subban not be given the shot at getting the job done, before looking in another direction? Is the plan to set him up for failure, before even allowing him to prove his worth?

Regardless of Saturday's outcome, Canada need to do the right thing and name the kid the starter. Showing confidence in your supposed starting goaltender, would seem like the logical thing to do.

There is no real need to try and reinvent the wheel here. Just handover the reigns and let him run with it.
Posted by Oil Drop at 3:09:00 am