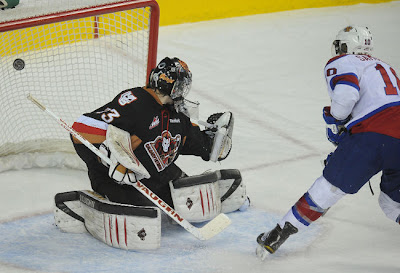 With both the Edmonton Oil Kings and Calgary Hitmen hoping to head into their Christmas break on a winning note,  one was going to be leaving the Scotiabank Saddledome very disappointed on Tuesday night. On the strength of another solid performance from the Western Hockey League's top power play and penalty killing units, the Oil Kings stretched their latest winning streak to five straight, with an impressive 4-1 pasting of the Hitmen.

Henrik Samuelsson led the charge upfront with a pair of shorthanded goals and an assist, while netminder Laurent Brossoit had one of his easier nights of the season, facing only sixteen Calgary shots. The two points pushed Edmonton past the Hitmen and into top spot in the Eastern Conference, one point clear of their provincial rival.

Calgary hit the board first with a late first period marker from Greg Chase and held a slim 10-8 advantage on the shot clock, after one period of play. Unfortunately for them, it would be all Edmonton over the final forty minutes of play.

A late first period penalty to Samuelsson left Edmonton down a man to start period two and despite killing off the two minute hooking minor, the Oil Kings would head right back to the penalty kill...courtesy of  a Brandon Baddock slashing penalty. Not exactly the start head coach Derek Laxdal had envisioned.

Lucky for the Oil Kings bench boss, his league leading penalty kill didn't give the Hitmen a sniff on the man advantage and actually tied things up on a Samuelsson one-timer. That goal gave Edmonton life and from that point on, it was all Oil Kings.

Moroz would give the visitors their first lead of the night, jamming home his sixth of the season behind Calgary starter Chris Driedger and just like that, the  defending Western Hockey League champs were out in front.

With Edmonton back on the penalty kill, Samuelsson would pot his second short-handed marker of the period and third of the season, beating Driedger on the breakaway for his eighteen on the campaign, giving the Oil Kings a bit of breathing room. The Phoenix Coyotes first rounder has put together multiple goal games on three separate occasions this season and sits second on the club in goals, only one back of Michael St. Croix.

Lazar would close out the scoring late in the third, redirecting home his fifteenth of the year and giving Edmonton their fourth special teams goal of the night. The Oil Kings held the Hitmen to just six shots over the final forty minutes of play...including a third period that saw Calgary register all of one shot on Brossoit.

The victory gives Edmonton back-to-back wins over their division rival, after dropping their first four against the Hitmen. Despite losing the season series, 2-2-1-1, the Oil Kings carry all the momentum heading into the second half of the year. With Edmonton owning the best power play (29.6%) and penalty kill (92.2%) in the league and only recently starting to find their  "A game" it could be a very long second half of the season for the rest of the WHL.

The most impressive thing about their most recent run, is they continue to find ways to win games, despite being without three of their top four blueliners in captain Griffin Reinhart and David Musil, whom are both currently preparing for the 2013 World Juniors Championship, and Martin Gernat, who has missed the entire season due to injury.
Posted by Oil Drop at 4:02:00 am