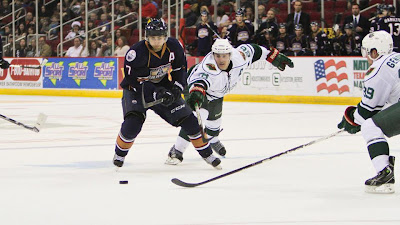 After riding the coattails of Jordan Eberle to back-to-back weekend victories over the San Antonio Rampage, the Oklahoma City Barons fell just short of completing a perfect weekend, falling 4-3 to the Houston Aeros in you guessed it...another shootout. Taylor Hall led the charge upfront, with a goal and two assists, but in the end it wasn't enough.

The win marked the fifth time in six outings that the Aeros have manged to slip by the Barons, three of those coming via the shootout. Despite dropping his fourth decision to Houston on the season, goaltender Yann Danis was simply outstanding, stopping forty-two of the forty-five shots fired his way.

Houston wasted little time jumping on their weary division rivals, as Ron Mignardi would score his first of the campaign, easily beating a down and out Danis, to make it a 1-0. However the lead would not last long, as Hall would pick up a loose puck and bury his eight of the year.

After being held pointless during Eberle's monster game, Hall was itching to make his presence felt on the ice and score sheet. Before the period was out, he would add his second point, as Oklahoma City's league leading power play unit would strike again.

With the Barons on their second man advantage of the opening frame, Justin Schultz would score his thirteenth of the year, as his point shot found its way through a maze of players and past Aeros starter Matt Hackett. Despite coming out somewhat flat, OKC found themselves with a one goal lead after a period of play.

Unfortunately, they had little left in the tank for the remaining forty minutes, as Houston started to take things over. Their legs looked to be getting heavier with each passing shift, leading to the Barons being assessed four of the next five minor penalties. While the Aeros were unable to capitalize on their chances with the man advantage, the constant barrage of pressure would eventually net them the equalizer, as a deadly finish, off the stick of Mikael Granlund, would get them back on level terms.

Through forty minutes, the shot clock had Houston holding a 26-15 advantage and that gap would only grow further in the third.but Danis continued to hold his team in it. He turned away one wave after another, while his teammates could not even register a single shot on goal at the other end.

Despite being thoroughly outplayed, the Barons would grab the lead on their first shot of the period. Mark Arcobello continued to find ways to get on the score sheet, beating Hackett on the glove side, that the young netminder would love to have back. Eberle and Hall would both pick up assists on the play, as head coach Todd Nelson decided to reunite his three most productive forwards, in hopes of creating some sort of offence.

As has been the case on far too many occasions this season, Oklahoma City could not find a way to win it in regulation. An ill-timed slashing minor to Jordan Henry would prove costly, as Jason Zucker tipped home his thirteenth, with just over three minutes to play, forcing yet another overtime session between the two South Division foes.

Not surprisingly, little changed in the extra session, as Houston continued to press but Danis shut the door. Having already turned away three quality chances in OT, the Barons netminder was called upon to do a little more, after defenceman Martin Marincin was assessed a holding penalty midway through overtime.

The veteran puckstopper was up to the task, stoning Zucker on three separate chances and forcing this one to a shootout. Unfortunately for him and his teammates, the result was all too familiar

While the Oklahoma City tender managed to stop two of the four Houston shooters, his teammates did him no favours at the other end of the ice, as the quartet of Arcobello, Eberle, Schultz and Hall were all denied by Matt Hackett.

The loss leaves Danis with an 0-3 record in shootouts against the Aeros, while Hackett is at the opposite end of the spectrum, owning a perfect 3-0 mark. The Houston tender has now faced fourteen Oklahoma City shootout attempts on the season, allowing only just two of them to get behind him.

It was a disappointing end to a busy weekend for the Barons but having earned five of a possible six points is nothing to sneeze at. They currently sit in a tie for sixth spot in the Western Conference standings and are just two points back of Houston for second spot in the South Division and fourth in the conference.

With both Eberle and Schultz picking up a point each, the two remain tied atop the American Hockey League's scoring race, with thirty-eight points a piece. Eberle currently holds a three goal cushion over Syracuse Crunch forward Tyler Johnson for the AHL goal scoring lead, with nineteen. Whereas Schultz, continues to lead all skaters with twenty-four assists on the year.

After completing their grueling weekend set, the Barons are now off until Friday night, when they will pay a visit to the Texas Stars, on back-to-back nights, before shutting things down for the Christmas break.
Posted by Oil Drop at 4:28:00 am