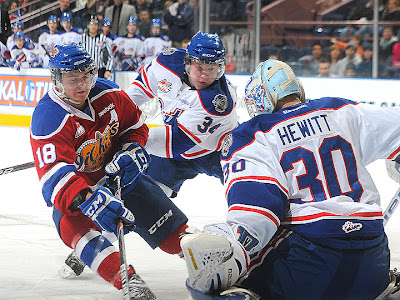 The Edmonton Oil Kings closed out their three game home stand in style on Sunday afternoon, pounding the Regina Pats by a score of 8-1 in Western Hockey League action. The Oil Kings top line of Michael St. Croix, TJ Foster and Dylan Wruck combined for six goals and twelve points, with St. Croix registering the first four goal game of his career.

Netminder Laurent Brossoit made his first start since being cut from Team Canada's World Junior camp and looked sharp in stopping twenty of the twenty-one pucks directed his way. The two points helped Edmonton keep pace with the Calgary Hitmen in the Central Division, who had little trouble beating the Kelowna Rockets.

With both teams coming off Saturday night games, the opening twenty minutes of play was about as uneventful as a period of hockey could be. That all changed in period two, as the Oil Kings power play simply took over the game.

St. Croix and Foster would opening the scoring with back-to-back power play markers, all of two and a  half minutes apart, to get the Oil Kings off and running, It would be a sign of things to come, as Edmonton would blow this one wide open in the third period.

After scoring five times in the second period of Saturday night's 5-2 win over the Victoria Royals, Edmonton would take it to the next level against the Pats. The six goal third period outburst set a new season high for goals in a period and also set a new club record of five power play goals in a single game.

St. Croix would score inside the opening minute, to make it a 3-0 lead but to Regina's credit, they started to make a push and were rewarded with their lone goal on the night, courtesy of Stephen Hak, after Brossoit had made two brilliant stops to keep his shutout alive. The visitors kept coming over the next five or so minutes but were unable to sneak another one behind the Oil Kings starter.

The man of the night would complete the hat-trick, scoring his third straight goal on the man advantage but this one had a bit of a different twist. He looked to have missed a glorious opportunity of nabbing his second hat-trick of the 2012-2013 campaign, as he nailed the crossbar with a quick release from the slot. However, once the play finally came to an end, after the Oil Kings top goal scorer nearly scored again, the play was reviewed and goal number three was handed to Mr. St.Croix, making it a 4-1 game.

Klarc Wilson would tip home his third of the season, on a lovely feed from Wruck to make it 5-1 before St. Croix would add another, matching Foster's four goal effort from earlier this season. The goal was his nineteenth of the season and fourth of the night on the man advantage, giving him thirteen power play goals on year, which is good enough for top spot in the entire WHL.

Brandon Baddock and Foster would add to the running tally late in the third, making the lead a converted touchdown. In the category of "taking one for team", Regina netminder Matt Hewitt was left in for all eight goals and not given the mercy hook by Pats bench boss and former Edmonton Oilers forward, Pat Conacher.

While Hewitt had little to no help from his teammates, Conacher obviously felt leaving in the twenty year old "veteran" to take on the burden of playing behind a team going through the motions, was the way to go. He could have turned to his eighteen year old backup Teagan Sacher but at that point, there was no reason to do so.

The Oil Kings have now won four straight and will look to head into the Christmas break on a winning note, as they travel down south to take on the Hitmen on Tuesday night. With the two sides separated by a single point, the winner will head into the break as the top team in the Central Division and look to carry that momentum into the second half of the season.
Posted by Oil Drop at 6:27:00 am