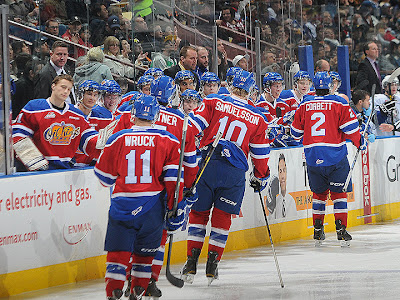 In the words of the immortal Don Cherry, it was a good ol' Rockem' Sockem' affair at Rexall Place on Saturday night, as the Edmonton Oil Kings outlasted the visiting Victoria Royals 5-2, in what was a highly entertaining affair. It was a total team effort, as Edmonton had twelve skaters find the score sheet and netminder Tristan Jarry was rock solid, in leading the defending Western Hockey League champs to their third straight victory.

Royals captain Tyler Stahl opened the scoring at the 5:45 mark, as his seeing-eye point shot found its way through a maze of players and past Jarry. It was a lead they would hold until early in the second period...when the Oil Kings took over.

Defenceman Cody Corbett would get Edmonton on the board, blasting home his second of the season, after the Royals allowed the blueliner to skate in and hammer a bullet behind starting netminder Patrik Polivka. Unfortunately, the Oil Kings tender would give that one right back, letting a harmless looking shot from Steven Hodges to find its way through the wickets, restoring their one goal lead.

What could have been a momentum killing moment was quickly rectified by one Mitch Moroz, who dropped the mitts with blueliner Jordan Fransoo and he not only re-energized the crowd of over 7,100 but also got his teammates fired up, with his decisive victory.

The fact Fransoo picked up an extra minor for cross-checking made the situation that much worse for Victoria, as Michael St. Croix would eventually tie things at two, after the Oil Kings were buzzing for the entire man advantage. If not for a ridiculous "face-block" from Stahl, Edmonton would have had the equalizer even sooner.

From that point on, it was all Oil Kings but not before the fight card had itself another main attraction, as the always game Klarc Wilson decided to take on towering Royals defender Keegan Kanzig. To Wilson's credit, he manged to hold his own against the big man and moments later, TJ Foster would give Edmonton their first lead of the night, with his fourteenth of the season.

Keegan Lowe would pounce on a loose puck to make it 4-2 and before the period was out, Brandon Boodock would bury his fourth on the campaign to close out the scoring and chase Polivka from the Victoria net. The five goal second period explosion was Edmonton's biggest single period onslaught of the season and  came on just thirteen second period shots.

While this one was all but over after forty minutes, the physical play continued into the third, as Stahl absolutely obliterated Luke Bertolucci along the Royals blueline with a vicious hit. With their linemate down and out, both Wilson and Boodock jumped into the ensuing scrum, that saw Wilson slapped with another seventeen minutes in penalties and Stahl's busy evening come to an early ending.

The win allowed the Oil Kings to keep pace with the Calgary Hitmen and remain one point back of their provincial rivals, for top spot in the Central Division standings. Edmonton will close out their brief three game home stand on Sunday afternoon, when they play host to the Regina Pats.

Starting netminder Laurent Brossoit will return to the Oil Kings starting lineup, as he makes his first start since being a late cut from Team Canada's World Junior camp. After a somewhat uneven start to the year, the Calgary Flames draft pick has found his game in recent weeks, in helping Edmonton regain their place among the elite squads in the entire Canadian Hockey League.