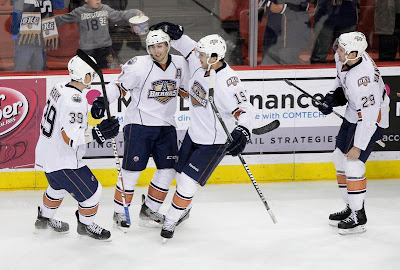 While defenceman Justin Schultz has been the talk of the American Hockey League with the torrid start to his pro debut with the Oklahoma City Barons, he suddenly has company atop the league scoring race. That company being none other than current teammate and future Edmonton Oilers teammate, Jordan Eberle.

After torching the San Antonio Rampage for four goals and five points, in the Barons 5-2 Saturday night win, Eberle no tonly grabbed sole possession of the league's goal scoring race, with nineteen, but now finds himself in a dead heat with Schultz for AHL scoring lead, at thirty-seven points a piece.

Centre Mark Arcobello was the biggest beneficiary of the The Jordan Eberle Show, collecting four assists on the night, as he continues to show fine form playing alongside the Oilers sniper. Former NHL veteran Jon Sim scored three more times in the losing effort, giving him all four San Antonio goals during the weekend set.

The Barons did not get off to the start they were hoping for, as Sim scored his first of the night before the game was even four minutes old. The lead would hold until late in the first, when Schultz would bury his thirteenth of the season, and unleash the crowd of just under 6,500 to litter the Cox Convention Center playing surface with thousands of teddy bears.

Having just watched the Edmonton Oil Kings pull off a tremendously successful Teddy Bear Toss Night just over a week ago, hockey fans in this neck of the woods, were more than familiar with th scene that unfolded.

The late goal seemed to give Oklahoma City life heading into period two...or at least a certain guy wearing #7. Eberle would give them their first lead of the night, despite entering the San Antonio zone one-on-three, he beat starter Dov Grumet-Morris high to the stick side with a perfect shot.

Eberle wasn't done there, potting his second of the period, just under seven minutes later, finishing off a lovely feed from Arcobello, on what looked to be a harmless play entering the Rampage zone.

Sim would cut the lead to one with a power play marker, late in the frame, sending both sides into the intermission with a chance at pulling this one out. However, for the second time in as many nights, the Barons would get the job done...courtesy of the league's top goal scorer.

A late Rampage penalty in the dying seconds of the middle frame would prove costly for the visitors, as Eberle would tip home his hat-trick goal, fifty-two seconds into period three, to make it a 4-2 game. The insurance marker not only gave OKC some breathing room but was the Regina native's first three goal night of his professional career.

To San Antonio's credit, they would not go away, as the former Atlanta Thrasher centre brought them back to within one, beating Olivier Roy for the third time but that would be as close as they would get.

Eberle would round out the scoring with his fourth of the game, into an empty net, and pull the twenty-two year old into a tie atop the scoring race. More importantly, the win allowed Oklahoma City to put some space between them and their South Division rivals and gain a measure of revenge against the hard working Rampage.

The Barons will close out their three game in three night weekend, as they pay a visit to Houston Aeros on Sunday evening, in hopes of completing the weekend sweep. If Todd Nelson's crew find the result they are hoping for and get a little help on the out of town scoreboard, they could very well find themselves within three points of the division leading Charlotte Checkers.
Posted by Oil Drop at 8:50:00 am