Oil Kings slide back into top spot with win over Kootenay 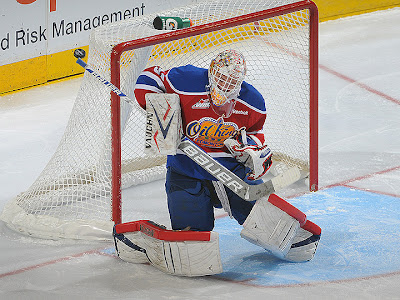 Edmonton Oil Kings netminder Tristan Jarry continued his storybook campaign, registering his second shutout of the season, in helping Edmonton to a crucial 2-0 win over the Kooteany Ice at Rexall Place. The victory moved the defending WHL Champions back into to top spot in the Central Division, two points clear of the Calgary Hitmen.

Henrik Samuelsson extended his point streak to nine straight games, with his thirteenth goal of the season and leading scorer Michael St. Croix  picked up two more assists, to move back into the top ten in the Western Hockey League's scoring race. Defenceman David Musil continued his strong all round play, registering a team leading +4 rating over the two game set, as he continues to improve with each and every outing.

Edmonton came out looking to avenge Wednesday night's 5-4 loss, in which the Oil Kings blew a 3-1 third period lead, before falling in the shootout. T.J. Foster would open the scoring, burying goal number thirteen, thanks to great feed from Michael St. Croix.

That goal would be all the offence we would see, until Samuelsson broke free for a breakaway in the dying seconds of period two and doubled the lead, with a nifty little move to beat Ice starter Mackenzie Skapski, to make it a 2-0 game. Just as they had in Kootenay, Edmonton headed into the second intermission with a two goal cushion and a hefty advantage, 30-17, on the shot clock.

However, there would be no comeback on this night, as the hosts shut the door in the third. They were unable to get another puck behind Skapski to put that final nail in the coffin but it mattered little, as they allowed all of three shots against over the final twenty minutes of play.

The Oil Kings continued their dominance on the penalty kill, successfully killing off all five Ice power play chances but in a game in which Edmonton clearly carried the play, how is it they did not get a single opportunity on the man advantage? How a team can out shoot their opponents by more than a two-to-one margin, 44-20 to be exact, and yet not see a single power play? Simply baffling.

With the win, Edmonton now sit with a 17-5-2-3 record on the year and will look to kickoff the month of December on a winning note, as they play host to the Lethbridge Hurricanes on Sunday afternoon.
Posted by Oil Drop at 4:23:00 am